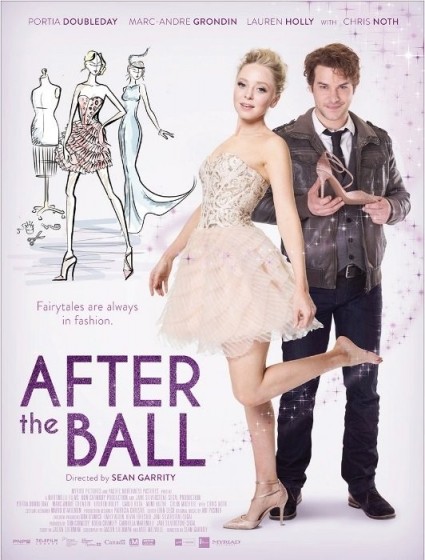 Having experienced the heavy-handed full-Disney-press of the new live-action Cinderella trailer lately, it was a real pleasure to discover this Montreal-shot picture that, with a delightfully light touch, uses the overly familiar story as a springboard to tell the tale of a young, talented fashion designer navigating her father’s garment company while in drag.

Yeah, you read that right. Portia Doubleday plays Kate, estranged from father Lee (Chris Noth, sporting some funky eyewear), a guy who in the 1990s founded Kassell, a fashion house that started doing in-house work but now steals ideas from competitors and assembles all its product in China. Her father’s reputation is seriously hampering her ability to get work, despite her obvious gifts, so, tail between her legs, she returns to Montreal and stays with her “dogmother” Bella (Mimi Kuzyk) and designer Richard (Carlo Rota, channelling Stanley Tucci). Hoping to design at Kassell, Kate runs afoul of her evil stepmother, Elise (Lauren Holly), and stepsisters Tannis and Simone (Natalie Krill and Anna Hopkins), all of whom conspire to get rid of her.

That’s when Bella and Richard hatch the plan to turn Kate into Nate, a male designer who storms Kassell’s barricades, hoping to turn the company back into the fashion forward production it once was.

And yes, there is a prince charming—a shoe designer at Kassell named Daniel (Marc-Andre Grondin) who Kate takes a fancy to.

There are times when After The Ball is explicit in its fairy tale connections, and in that it can feel either too sweet or too obvious—but large swaths of the picture function as just straight-ahead romcom and workplace comedy, one with a solid narrative and fully realized characters. This is a dynamic cast, each allowed by a varied and funny script a moment to shine. The MVPs are undoubtably Hopkins and Krill, who are the dumbest, evilest fashionistas you’d ever want to meet When Kate becomes Nate, the transformation is pretty impressive. It might not be entirely convincing in the flesh, but it’s better than average fairytale-movie-convincing, with the terrific Doubleday working hard to sell the conceit. S/he has a couple of great moments with Kassell designer Maurice (David Michael) as they assess Daniel’s appeal.

And even with the presence of Americans Doubleday, Noth, and Holly, this feels very much like a Canadian production, and I don’t mean that at all pejoratively. The nice mix of anglophones and francophones, especially in the scenes at Kassell, make it really feel like Montreal, along with the cobblestone old city exterior locations.

After The Ball is a pleasant surprise. I can’t imagine a young person with an interest in fairytales and/or fashion who wouldn’t have a blast at this. Maybe more than at that Disney pumpkin coach soon coming down the pike.