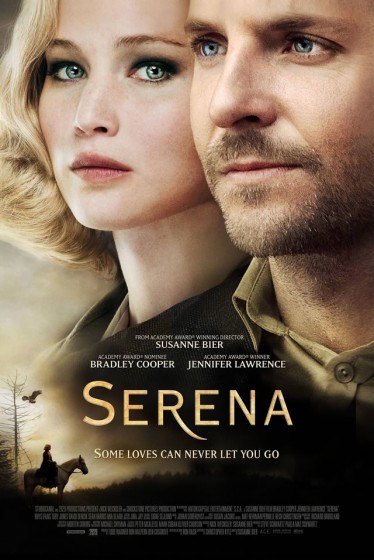 If Serena was in Danish or French, I think the film would be garnering a lot more positive reviews than it is.  In English we just don’t have as much time for this kind of a story, with characters’ emotions raging away, people behaving as if they’re in a Greek tragedy.

That said, Serena isn’t very good. But I’ll also add that, thanks largely to Jennifer Lawrence, it’s at least 10% better than the 31% on Rotten Tomatoes would indicate.

It’s set after the market crash of 1929—a burgeoning timber business down in North Carolina is going off the rails thanks to diminishing investments and poor management by the owner, George Pemberton (Bradley Cooper). On a business trip to the city he meets the love of his life, a forthright “broad” named Serena (Lawrence). In a whirlwind romance depicted by a montage, naturally, they hook up and get married.

She grew up in the woods in Colorado and knows a thing about the timber business. Back at the camp she immediately takes to being a partner as well as a wife, ruffling the feathers of Pemberton’s number one guy Buchanan (David Dencik), while earning the respect of tracker and all around hard man Galloway (Rhys Ifans). Meanwhile, Pemberton,  with his dodgy accounting and opposition to the area being declared a national park, has attracted the attention of the local sheriff (Toby Jones). And Pemberton’s gotten one of his employees (Ana Ularu) in a family way, which will certainly complicate his life and his relationship with his new bride.

Serena struggles to find a real narrative thrust in the midst of all of these scattered threads of plot, through multiple scenes of people staring at each other around steam trains, swinging axes, and lingering in yards of mud. It’s not a tale of a raging, unstoppable capitalist a la There Will Be Blood, nor is it a Bonnie and Clyde-styled love story about two same-thinking unlawful iconoclasts. Either of those tropes would have been better, actually. It’s simply a drama absent any kind of subtlety that sinks into a morass of muddied motivations. Bier has played these kinds of notes to a more effective tune before, in After The Wedding and Brothers, for example. But as the third act of Serena rolls around, everything falls apart, including any real cohesiveness in the plot.

I’ve never seen the cover of Rash’s novel, but I can imagine it has a guy who looks a bit like Cooper standing on a misty hilltop, one boot on the remains of a mountain lion, wearing an open white shirt showing off his chest and abs, and behind him, on horseback and carrying a rifle, the titular beautiful blonde, her hair perfect, her bodice ripped.

The film’s secret weapon, and what makes it worth sitting through at all, is Lawrence. 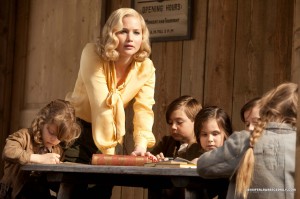 I’ve observed that she makes every movie she’s in better just by her presence—she lifts the quality of all the actors around her, as only the most authentic performers can do. And while her character never really gets to be as effective as you hope she’ll be before she skips into the deeper pools of madness, you still can’t take your eyes off her.

In recent big budget fantasy and indie comedy pictures she’s proven she’s the heir to talented young female stars of the past. Here she shows she can swing for the fences like Barbara Stanwyck or Joan Crawford once did in those 40s and 50s potboilers.

Unfortunately, Cooper underplays, which is the wrong choice for this kind of material. He needs to burn bright and chew the scenery, but instead is soft and a bit shallow.

I should also mention Ifans, who has carved out a hell of a career as a character actor and master of many accents. I’ll probably always think of him as Hugh Grant’s ridiculous Welsh roomie in Notting Hill, but here he broods with effective menace.