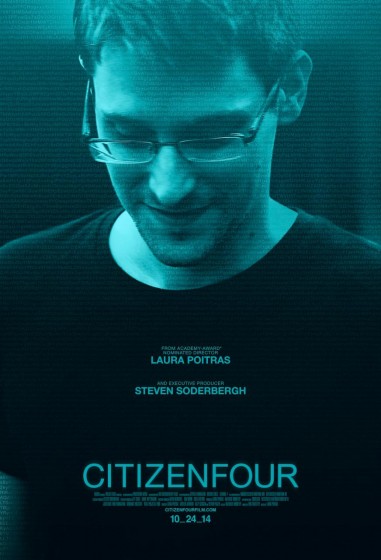 I read the articles in the summer of 2013 when we all learned Edward Snowden’s name. I understood the ways the NSA had trampled upon the rights of privacy of American citizens and people around the world. What Poitras’ documentary does is put you right there as the story is breaking in the days Snowden was holed up in a Hong Kong hotel room, debriefing Poitras and Glenn Greenwald about his surveillance work.

I don’t write much about documentaries on this blog. I really enjoy them—Sarah Polley’s Stories We Tell was my favourite film of 2012—but I feel like this place is for talking about fiction, primarily. However, CitizenFour is too important and too terrifying to not say something about it. I came away considering the following:

• Orwell’s prophesies have nothing on what we’ve allowed to happen.

• While I generally think Obama has done a decent job, the surveillance state that has flourished on his watch is totally appalling.

• Much of this tech, time, and money put towards intercepting communication wasn’t about anti-terror efforts at all, it was about market advantage. That might be the most obnoxious thing.

• Edward Snowden exhibits jaw-dropping bravery given the shitstorm he invites upon his head. The film considers his sacrifice heroic, and it’s hard not share that sentiment. This is the modern example of a man versus his state—he betrays his country in order to save it.

• Though it’s leaving the Oxford on Friday, CitizenFour is in cinemas in Halifax for at least one more week. I strongly recommend seeing it.