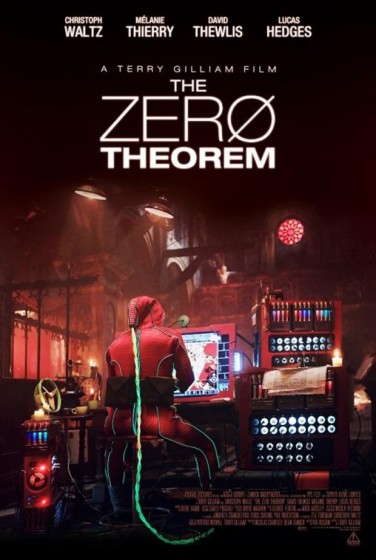 I’ve always admired Terry Gilliam, even when I haven’t loved his movies. His legend as a giant slayer—largely due to his masterpiece  Brazil having found an audience in his preferred version despite the studio meddling—still carries serious weight today, 30 years later. And the Monty Python alum’s favourite themes—the individual against the state, the dehumanizing nature of technology, retro-futurism, the line between fantasy and reality—never really go out of style.

Which is why I got a minor kick out of The Zero Theorem (available online, on DVD and Blu-Ray in Canada), even as I recognize it as kind of a mess. Just like I recognized his last movie, The Imaginarium of Doctor Parnassus, was kind of a mess. It’s Terry’s mess, and I’d rather watch him play by his own rules than most machine-tooled entertainments.

His wildly introverted hero this time is named Qohen Leth (Christoph Waltz), a dude who works as a computer wizard for a faceless conglomerate and speaks of himself only in the plural. Qohen gets along with almost no one as he busies himself crunching entities, whatever that is.

All he really wants is to work from home, because in this world sans mobiles, he needs to be there in order to receive a phone call that he expects will give meaning to his life. He petitions his supervisor (the eternally weaselly David Thewlis) and his management (Matt Damon with a truly awful dye-job): They agree, provided he focus his energies on solving the unsolvable titular equation. His mental issues get some attention via private sessions with a digital therapist (Tilda Swinton), and Qohen gets friendly with a peculiar French woman (Melanie Thierry) and his boss’s son (Lucas Hedges), all the while becoming more and more frustrated with the unsolvable black-hole math in the the machine.

There are other shiny points of light in this constellation of a plot, but I’ll leave them for you to discover. The story is episodic and occasionally difficult to follow, with Gilliam employing his favourite skewed camera angles and fish-eyed lenses to keep us off balance. What does it all add up to? I’d hesitate to say.  While the echos of Brazil are as blatant here as anything he’s done, generally I got off on both the nostalgia and the regurgitation. Gilliam’s future is hazy and psychedelic, envisioned as if from the mid-40s and mid-70s, amalgamated, and pumped full of luminescent gas. Huff on this.