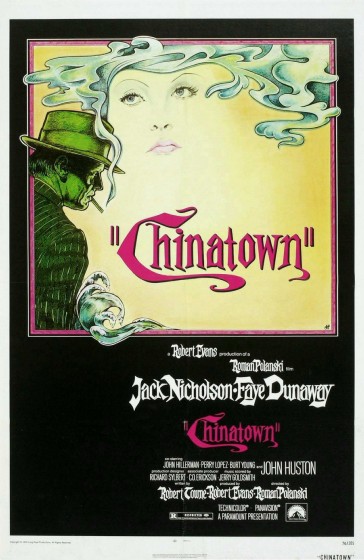 I never cease to find the movie astonishing in it’s acting, sense of place, and most of all, screenplay. The narrative locomotion, how it starts slowly, dropping clues to the mystery of personal and municipal malfeasance, then speeds up in the final act to its devastating conclusion… well, it’s a work of art. It’s a period noir and yet still completely about the political corruption of the 1970s. It has everything I look for in movies.

And that’s why it inspired the title of this blog. JJ Gittes remarks to Evelyn Mulwray that she has something black in the iris of her eye, an imperfection. Eyes and personal perspective is both a visual and a thematic trope in the movie. I thought it fitting as both a reference to the film and a way to suggest everyone’s opinion is subjective, especially mine. There’s no absolute truth when you talk about art or life.  Pragmatism is the essence of the age.