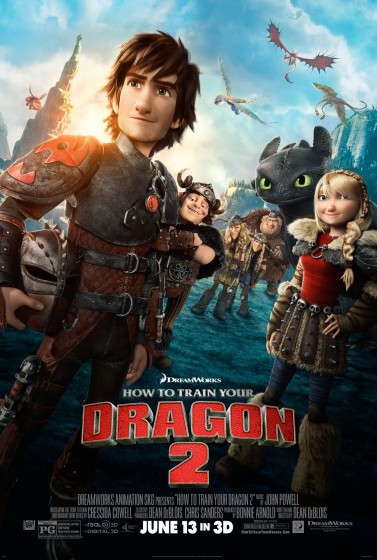 Directed by Don DeBlois, adapted by DeBlois from a book series by Cressida Cowell

Steering clear of all things Transformers this week—does anyone really need another one of these Michael Bay monstrosities?—I decided to catch a friendlier looking sequel.

I do have to say, there’s something kind of shameless when a sequel comes out with the same title as the original, the only change being the addition of a numeral. The Lethal Weapon and Toy Story series helped prove the strategy works, I suppose.

I can happily report the return of dragon-rider Hiccup is no simple regurgitation of the 2010 original Dreamworks animation. That’s at least partly due to the clever ways they’ve allowed the story to move forward in time.

Hiccup (voiced by the always affable Montrealer, Jay Baruchel) is now 20. In the previous movie his understanding and compassion for dragons ended the war between his Viking village and the flying critters, and now the humans have totally incorporated the dragons into their lives—including racing them in a Quiddich-esque game involving sheep—and using them for long-distance exploration.

But, of course, Hiccup’s life is still complicated. His father Stoick (an especially growly Gerard Butler) wants Hiccup to become chief, though Hiccup isn’t particularly interested. (And by the way, has anyone explained why Hiccup sounds like a Canadian when his father is clearly a Scot?)

On a range with girlfriend Astrid (America Ferrara) and his trusty dragon Toothless, Hiccup stumbles across another human-versus-dragon war, where a rogue warlord, Drago (Djimon Hounsou), and his minions are looking to control all the dragons, while a mysterious masked figure (voiced by Cate Blanchett) is trying to protect them.

A few things struck me:

A frantic visual and narrative thrust in the first act makes it hard to get emotionally grounded in the movie right away, but as it goes along the plotting and character development find purchase. That said, probably three or four characters who just add noise to the story they could have easily done without. (Kit Harrington’s Eret, I’m looking at you.)

In the four years since the first one, the animation has taken an exponential leap forward. Especially the subtle expressions in faces of the characters.

Hiccup starts as a peacemaker, convinced if he can just talk to Drago he’ll be able to teach him the lesson Hiccup learned in the first movie, how dragons needn’t be feared. But the new lesson here is that some people are just bad, and if they’re operating from a place of revenge and anger, the only way to deal with them is to kick their asses. That’s an interesting, hawkish political undercurrent running through the story. It made me slightly uncomfortable in a picture ostensibly aimed at kids.

The dragons are the real stars of the thing. The sheer imaginative variety of winged reptiles is wonderful. And I figured Godzilla would be the only giant monster movie I watched this summer, but I was dead wrong. Fans of Hayao Miyazaki will want to catch How To Train Your Dragon 2 for the very Miyazaki-esque Alpha dragons. Great stuff.