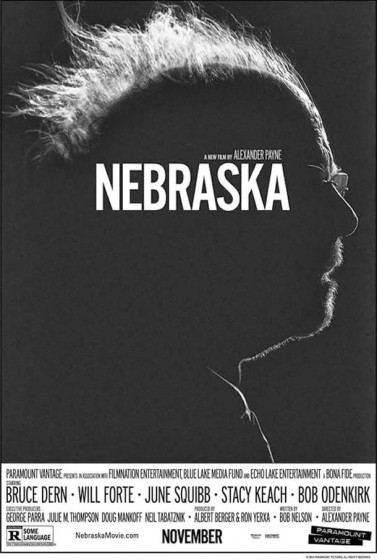 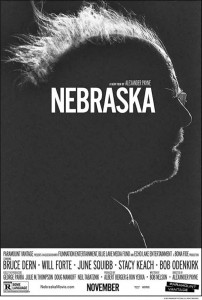 The other day I lauded the Coen Brothers (and their new movie) for a particular brand of Americana, comparing their work with that of their American filmmaking brethren. I really should have included Alexander Payne to that list. Consider his recent features: Citizen Ruth, Election, About Schmidt, Sideways and The Descendants, a collection of unpretentious stories of human relationships, set in expansive American landscapes. And even though Bruce Dern is the putative star of Nebraska, the movie’s real leading character is the place and the way Payne reveals it.

(Other additions to that list, incidentally: David O. Russell, despite my not liking his film, and Richard Linklater, whose film I liked a lot.)

We start in industrial Billings, Montana and travel south and east to the fictional town of Hawthorne, Nebraska, a couple hours outside of Lincoln. Senior citizens Woody (Dern) and Kate (June Squibb) Grant live in Billings, as do their two sons, David (Will Forte), a home electronics salesman, and Ross (Bob Odenkirk), a TV news anchor. We meet Woody early one morning on the freeway, walking to Nebraska to collect the million bucks promised to him by a sweepstakes ticket. David knows it’s bullshit, but is willing to indulge his father’s delusion to the point of driving him the 850 miles to collect his “winnings.” It’ll give then time together and away from Kate, who is a pain in both of their asses.

Things don’t go quite as smoothly as Dave hoped thanks to something that happens while Woody’s drinking, and they’re forced to stop in the small town where Woody grew up, connecting with the rest of the Grants. Cue the awkward familial conversations, the older, male segment pretty much unable to communicate at all. TV is on all the time. And when word gets around that Woody is going to be a millionaire, it turns him into a minor celebrity. That’s when Stacey Keach appears as an old buddy of Woody’s.

Lately more and more movies are getting green-lit featuring older folks in key roles. Producers are looking to capture a boomer audience. I think this is great development, and quite frankly, I’d much rather spend time with Payne’s vision of older folks than what we get from Last Vegas or Grudge Match. Especially if Bruce Dern is in it. The guy is a legend who doesn’t get enough recognition, and it’s wonderful to see him in the centre of a movie again. His Woody is so recognizable to me. He was never expected to say too much, so never did. And now that he’s in his 70s and prone to confusion, it’s hard to know what the hell is going on with him. There’s no sentiment here, just a great, believable character.

As David, Forte smartly underplays it. He’s not a pushover, but neither is he especially ambitious or forthright—at least until the end. Kate gets a great moment or two in the third act. If Dern gets award attention for his role, expect June Squibb to as well.

As I said, the universal story of a father and son on a road trip is dwarfed by the even bigger tale of diminishing returns and a sense of helplessness in the face of tough times. Woody’s problems are reflected in the town around him. Hawthorne hasn’t had any infrastructure improvement since the 1970s—maybe the 1950s. The film takes in all the stark beauty and economic despair, a land of dusty dreams.

Thankfully the humour in the screenplay is so sharp. If you can’t laugh at age and decay, what can you do?