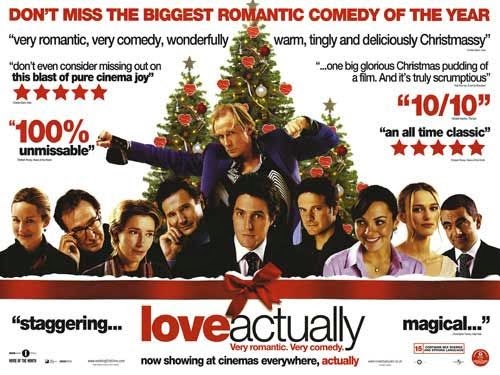 Earlier this month, one of my favourite film writers, Christopher Orr of The Atlantic, wrote a piece excoriating the Richard Curtis film Love Actually. It generated quite a bit of discussion, which Orr kindly gave a nod to in his follow-up piece. He even went so far as to debate the merits of the film on CBC’s Q radio show. And since then a lot more items have been written defending or slamming the film.

Why all this discussion of a 10-year-old movie that didn’t get that great reviews when it first came out? Because, for some reason, it’s gained cultural currency in the decade since then. It’s now considered something of a modern Christmas classic, doncha know. People really love it, and will watch it again and again, even when it’s not Christmas.

And I love it when this happens, when a film strikes an unexpected chord with viewers. And I love to read arguments about why a film is or isn’t worthy of the attention.

And what’s my opinion of Love Actually (…I hear you ask)? On this Christmas Day I thought it might be fun to unpack my thoughts, especially as I just saw the movie again this morning.

My first reaction in reading Orr’s piece a couple weeks ago was that he was being a bit of a grinch. Yes, I understand his arguments from an intellectual standpoint. There is something problematic about all the older men falling for younger subordinates, about what the movie says about men and supermodels or conventional ideas of beauty, and the fact that so few of the story lines actually feature any real communication between the characters.

And I can see why he thinks the Keira Knightly story is creepy and weird. I don’t really understand why it is Laura Linney has to end things with her new hottie love interest because of her brother’s mental health issues. Does the fact of one totally undermine the possibility of happiness in the other? And the dude who goes to Wisconsin and comes back with Shannon Elizabeth and Denise Richards? That’s so broad all you can do is laugh… or groan.

But here’s the thing I like about Love Actually, and maybe it’s why so many people like it. It is made with a whole bunch of self-awareness, about characters who have so little. The story lines are engineered for an audience that knows what romantic comedy tropes are all about, and knows about the inherent silliness of these kinds of movies. I think Curtis is playing off them, winking at us as he indulges in the most outrageous of Hollywood conventions. It even has a character running through an airport in the end! That hoary old thing!

And what are romantic comedies about? Grand gestures. In real life, a lot of these hook-ups would fail for many of the reasons Orr points out. But in Love Actually, we get a rush seeing Colin Firth flying to the south of France to find and propose to Aurelia, a woman with whom he’s barely shared a conversation. That’s an outrageous and likely futile gesture, something very few people would actually do. You know it probably won’t work, or, if it does, it won’t last, but we don’t need to know more about the relationship’s future than we get to see here. Major vicarious thrill.

And the fact all this takes place at Christmas helps excuse the more sentimental excesses of the characters. I especially liked the Alan Rickman-Emma Thompson story, which is the saddest of the bunch, probably. There is some hope for redemption there, and the drama gives the film an anchor to places where the whimsy might carry the whole production up into the clouds.

Even the Keira Knightly storyline is lovely in its own way. It’s so wrong-headed, but when we see Andrew Lincoln standing outside her door, with the boom box and the cards, it’s sweet. It could have gone horribly, but it doesn’t. It goes exactly as you’d hope, without knowing what you hoped. That’s the secret of great screenwriting.

Finally, I think a huge amount of credit has to sit with the enormous and perfectly chosen cast. How much fun is it seeing Hugh Grant as the very unlikely Prime Minister, singing “Good King Wenceslas” to kids? Or hearing Bill Nighy’s many inappropriate comments? Or watching Thomas Sangster evade Heathrow security as he tries to declare his love to his sweetheart?

And I think if this was a PG-rated film, it wouldn’t fly, but there’s something about Curtis’ delightful, foul-mouthed dialogue that grounds his films in a place audiences can really enjoy. It’s a recognition, a knowing.

Huh. I wasn’t entirely sure what I was going to say about Love Actually when I started this post. I think this is quite a firm position of support.

Sorry, Chris, I can’t get with your assessment. But Merry Christmas to you, and to everyone enjoying movies from someplace warm inside. Especially if it’s Love Actually.