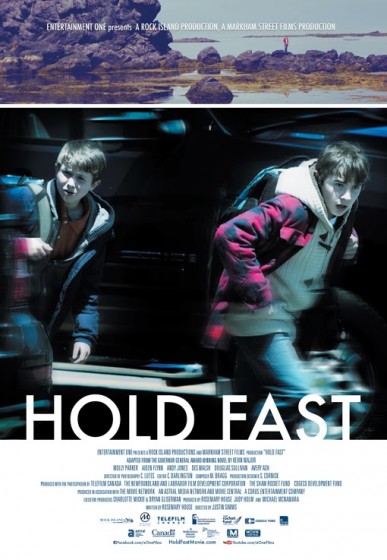 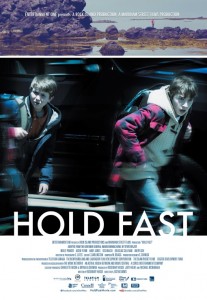 Directed by Justin Simms
Written by Rosemary House, based on the book by Kevin Major

Hold Fast is a sweet little coming-of-age movie based on a beloved Newfoundland novel. Simms—who made a far grittier film from Joel Thomas Hynes’ Down To The Dirt—updates the 1970s novel to the present day: 14-year-old Michael (Avery Ash) is a tough outport kid who loses his parents in an off-screen car crash. He’s sent to stay with his townie aunt and uncle (Aiden Flynn and the always authentic Molly Parker) and their teenager, Curtis (Douglas Sullivan), in Mount Pearl. Michael has pretty stringent ideas of right and wrong, and takes no guff from the school bully. He’s also brave and confident enough to woo a girl in his class. But Uncle Ted over-disciplines his nephew, so Michael runs away with cousin Curtis, and the coming-of-age elements cross over into road movie tropes, with Michael hoping to see a remote part of Newfoundland his parents once visited.

Simms and DP Catherine Lutes let the exteriors do the work for them, with tourist-board friendly shots of the province’s gorgeous, elemental coastline. The script hits the expected teen drama notes, mixing in a little adult melodrama along the way, telegraphing the emotional beats while asking a bit too much of an inexperienced cast of kids. This material is probably best enjoyed by an audience the age of those teenagers or younger.

I just couldn’t warm up to it. And while I think the filmmakers have told this inoffensive tale reasonably well, my gripe is more towards the system that funded it. The same system funded Simms’ Down To The Dirt, which was a little more daring and a little less predictable. More of that instead, please.

I know this region has more culture and diversity than we’re getting to see, more tales that need telling. And they have nothing to do with tiny dramas set in and around fishing villages.

Maybe we need to fess up and admit some of the local movies getting made aren’t terribly memorable. Which might be OK as a local industry grows and talent matures, but how long can we keep telling the same stories in the same ways? Especially if no one wants to see them? I’d be interested in knowing if Hold Fast, open for a week on a single screen in Halifax, garnered the audience of a single day of any Hollywood movie in the same multiplex.

I think it’s good to remember that Trailer Park Boys and Hobo With A Shotgun are amongst the biggest homegrown cinematic cultural exports from these parts in the past decade. And, love ’em or hate ’em, they’re a seafood-free zone.