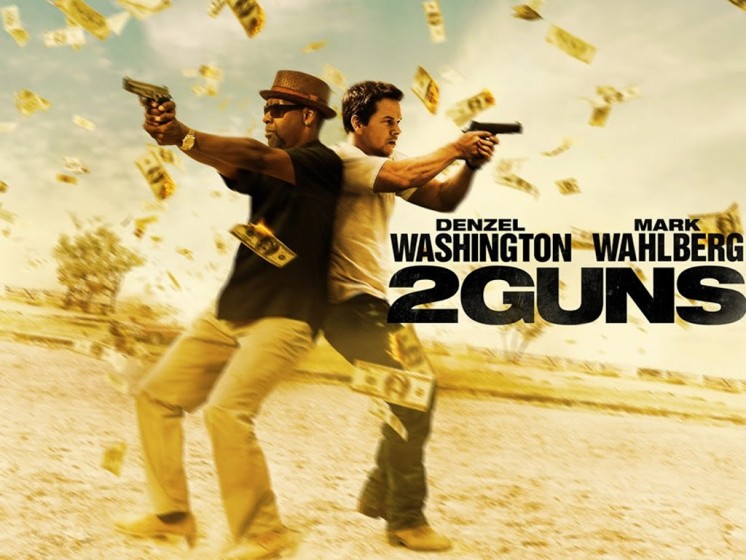 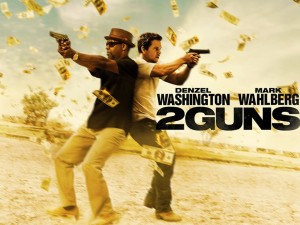 When I saw the generic poster and trailer, looking like another boilerplate action thriller from Denzel Washington, this time with Mark Wahlberg along for the ride, there wasn’t much about it that grabbed me. The director has 101 Reykjavik and Contraband on his resume, both films I’d heard good things about but hadn’t seen. A pleasure to say, then, how much fun 2 Guns is to sit through.

For starters, this is a buddy-cop movie. Yeah, it’s a fallow and fleeting subgenre that reached a zenith of sorts in the 80s and nadir shortly after, but the retro vibe and pacing of 2 Guns is one of its strengths. It almost feels as if it was directed by Walter Hill, if Walter Hill still made movies like Walter Hill. Also winning is the chemistry between its leads; Wahlberg and Washington’s ease with each other and in front of the camera never gets tired. And finally, it’s the quips. These movies pretty much live or die based on a zip in the conversation, peppered around explosions and gunplay. Plenty of zip in 2 Guns.

Wait, did I say buddy-cop? These guys aren’t really cops, nor are they entirely buddies. But that worked for Midnight Run. It works here.

Washington’s Bobby Trench is a career criminal who’s partnered with Wahlberg’s Stig, a fast-talking dead shot, to rob a corn pone bank in Texas. The first thing they have to do is take out the diner across the street for obvious reasons—the doughnuts there are the best in three counties.

We find out why the bank is appealing: it’s where Mexican druglord Papi Greco (Edward James Olmos, as grizzled as pork rind) puts his money, and Papi has been giving our boys a hard time over a snowbank of cocaine he promised them.

We also find out that Bobby’s actually in the employ of the DEA, and has been deep undercover for a long time, to the point where his superior (Robert John Burke) barely recognizes his motives. And Bobby’s been getting friendly with DEA colleague Deb (Paula Patton, who’s gamely been deglammed and aged to look like she’s in her 40s, making pushing-60 Washington look less like her father and more like a reasonable romantic clinch). But Bobby’s going to rob the bank anyway to get the evidence needed to put Papi away on tax evasion.

And Stig has his own secrets. He’s actually a Navy officer who’s also working undercover, which seems a bit weird to me in this land-locked tale. But anyway—his asshole boss (James Marsden) wants him to steal the drug money to help finance other black ops. Or something. This is where the plot gets a little confusing. But, as I learned way back in The Big Sleep, it doesn’t matter to us if the plot doesn’t make sense so long as Bogart understands what’s going on and acts confidently. And between them, Washington and Wahlberg approach a Bogie-like cool.

So they steal the cash, but come away with a whole lot more money than they expected. That’s because the CIA uses the bank to hold its own ill-gotten millions, and they send a particularly bad guy named Earl (the always loveable Bill Paxton) to get it back.

This is one of those stories where everyone is dirty. Everyone’s lying and conniving and cheating each other. Bobby and Stig are the heroes simply because they’re in the middle of all this criminality, not because they’re actually any cleaner than anyone else. And as it goes along, their motivations get fuzzier. Is Bobby really into Deb? Is he really a lawman at this point? Or is he planning to keep all the money himself and doublecross his “partner” Stig and everyone else who gets in his way? It’s fun to see how it evolves. And if in the last few scenes the movie becomes a kind of parody of itself, by that point I felt like it had earned a little allowance to go big and dumb.

As I mentioned, full credit to Wahlberg and Washington for their effortless star power. It’s their on-screen charisma that brings 2 Guns up above the level of a rote, b-movie actioner someone like Jason Statham—with all due respect to The Stath—would have shown up in. And it doesn’t try too hard, it just lets the story, the periodic action beats and a lot of charm carry the day.

Oh, and a colourful cast takes some of the lifting, too. Along with stellar work from the folks mentioned above, I wanted to say it’s great to see Remo Williams himself, Fred Ward, show up in a small role. Always liked that guy.

If it doesn’t ever trouble the status of a classic, it’s because, unlike the great Out of Sight, say, it doesn’t have someone like Jennifer Lopez. Not to snub Ms Patton, but her character hardly has the agency of a Karen Sisko, and this movie could use a bit more of a female presence.