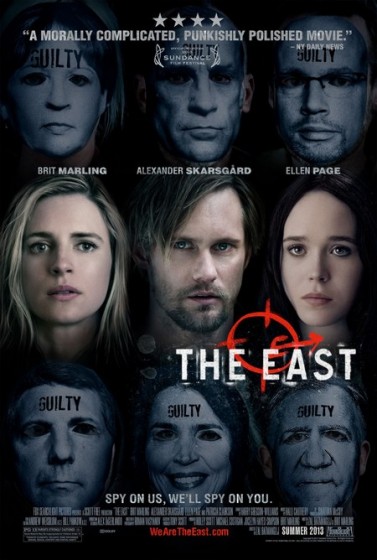 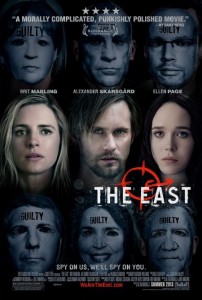 Directed by Zal Batmanglij
Written by Batmanglij and Brit Marling

Though it has a rising star in the lead (Marling) and an Oscar-nominee in support (Ellen Page), this eco-thriller is an underdog in the landscape of summer releases, and well worth seeking out.

Marling has made waves in recent years, as an actor, writer and producer, on films such as Another Earth and Sound of my Voice. As a co-writer, producer and star on The East, she delivers a zippy little suspense thriller built on a base of real-world anxiety around environmental exploitation and corporate malfeasance. It deftly messes with audience allegiances, which may upset some as it doesn’t solidly come down on one side or the other. I didn’t mind its political provocations—the film hits above its weight just by posing the questions.

Marling plays Sarah, a keen and capable agent for Hiller Brood, a private security service agency—basically a corporate spy—who is tasked with infiltrating the titular anarchist collective. The East is a loose group of far-left activists and eco-warriors living in a decrepit house out in the woods, led by the charismatic Benji (Alexander Skarsgaard, Erik from HBO’s True Blood) and including the tough-as-nails Izzy (Page). Sarah manages to get in with them and earn their trust while participating in “jams,” their eye-for-an-eye events staged to attract attention and show corporate America they can’t get away with poisoning people for profits—starting with giving the founders of a Big Pharma company doses of their own dangerous meds at a cocktail party.

Sarah learns quickly what The East is capable of, as well as the real interests of her boss (a reptilian Patricia Clarkson). How those conflicting missions impact her own moral compass—and her relationship with her boyfriend Tim (Jason Ritter) in her regular life—is a big part of the film’s structural suspense.

I really enjoyed The East. It did make me think about what is acceptable response in this era of seemingly invulnerable corporate giants. Marling communicates a cool and capable intelligence that makes her a natural lead, gracefully carrying the picture. One of the key relationships is between her and Clarkson’s character, a refreshing bucking of gender trends in this genre, ostensibly an espionage drama.

If the film falls short it’s in some of its plotting. Early on, Sarah’s cover is blown by one of the members of the group, and how she handles it feels fairly implausible. Her character can come and go as she pleases, which also seemed weird to me. How would she know when it was an appropriate time to come back to the group? There’s a couple of shots of running stallions that felt a bit too thematically obvious. And finally, I found the denouement a little far-fetched.

But all these concerns were ameliorated by the confidence in the direction, the smarts in the script that kept me guessing, and especially in Marling’s performance. She’s unshakable. I can’t wait to see where she shows up next.