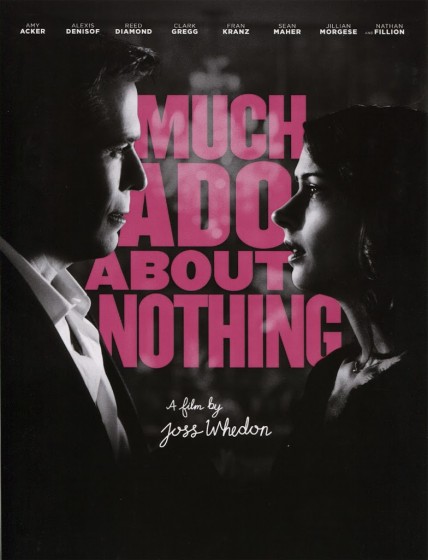 For those who have been suffering from heat exhaustion or the pummelling that accompanies seeing large-budget action movies every week through the summer, this is for you.

Delivered by one of those self-same blockbuster directors—though it’s pretty hard to imagine someone like JJ Abrams or Michael Bay doing it—the brilliant and continually surprising Joss Whedon brought together many of the performers who frequent his TV series—Buffy The Vampire Slayer, Angel, Firefly and Dollhouse—to do Shakespeare in and around his Santa Monica home. And all in beautiful black and white.

That single location had to be handy. Especially as Whedon made the movie in the spare time after he finished last years enormous hit The Avengers. Though that film was a logistical (and commercial) triumph, it’s easy to understand why he would turn to the bard as a filmmaking palette-cleanser.
Likewise, it serves similar purpose for audiences.

For those who don’t remember their Shakespeare, this is the one with two couples, the primary pair who seem to hate each other (Beatrice and Benedick, played by Amy Acker and Alexis Denisof) and a secondary who fall in love at first sight (Claudio and Hero, Fran Kranz and Jillian Morgese). The first two are fooled into falling for each other—the presumption is they were already in love, they just didn’t want to acknowledge it—and in the secondary, the thick Claudio is tricked into believing Hero has been untrue, providing some genuine drama in the midst of all this fluffy stuff.

Whedon’s light, breezy Much Ado About Nothing brings back to cinematic life a classic romantic comedy in an era where the genre is dead in the water. I’m no authority on Shakespeare, but this Hollywood production is a reminder that given a charming, fetching cast, a few complications and a lot of witty wordplay in between pratfalls, there’s plenty for everyone to enjoy.

And, speaking of wordplay and pratfalls, much credit should go to his cast, including Clark Gregg, Reed Diamond, and especially Nathan Fillion and Tom Lenk as Dogberry and Verges, the not-so-swift law enforcers who uncover at least part of the deception Sean Maher concocts to ruin everyone’s fun.

Acker deserves special recognition. Her Beatrice manages to find the perfect balance of intellectual acuity with cynicism, which, of course, hides the softer heart we get to see later in the running.