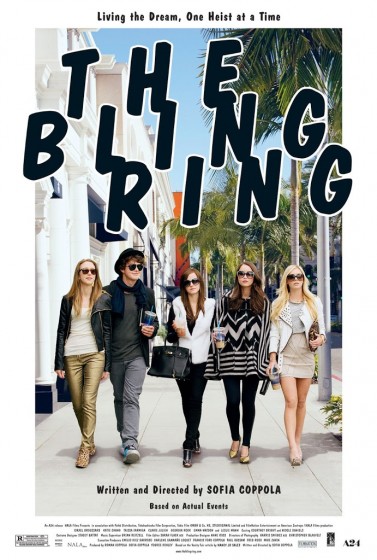 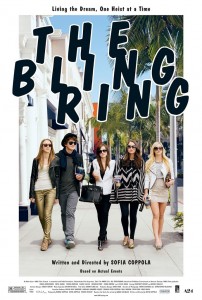 Written and directed by Sofia Coppola, from the Vanity Fair article by
Nancy Jo Sales

As an anthropological study, The Bling Ring works. As a study of characters who engage, it doesn’t really. Judge accordingly.

Based on the true story of affluent Los Angeles teens who—obsessed with celebrity in their midst—stole $3 million worth of clothes, shoes and jewellery from their tabloid idols, this is no typical heist picture. This is a story about teenagers who grew up bored and medicated. To the film’s credit they aren’t presented as loathsome creatures, just the product of their frictionless environment.

The film starts through the eyes of the new kid at school. Marc (Israel Broussard) is sweet, sensitive and likely gay. He immediately makes friends with Rebecca (Katie Chang), who is a bit of an enabler, but she helps Marc feel comfortable in this 90210-style status-obsessed high school. In her clique is Chloe (Claire Julien), Sam (Taissa Farmiga), and the most extroverted of the bunch, Nicki (Emma Watson). Watson has perfected the California valley girl delivery, and while her performance is a bit OTT, not so much that you don’t buy it.

Marc figures out that the idle (and idol) rich, just up the hill in slightly richer adjacent ‘hoods—Paris Hilton is a favourite of his—are often out at parties, and their addresses are easily found online. Cue free shopping excursions for him and his new friends. And that’s just when our sympathy for Marc ebbs. There’s a lovely moment when he admits his love for Rebecca to an unseen interviewer, but that’s the last time we feel like we’re on this journey through his eyes. After that he, Rebecca and their chums are opportunistic thieves, wandering through enormous, gaudy LA homes and taking what they want, before going to nightclubs to dance, drink, take a lot of selfies and rub shoulders with the selfsame stars they’re stealing from.

About halfway through the film I realized if you’re into high-end couture, there might be a vicarious thrill to be enjoyed in these kids’ exploits. Not for me. I found the fashions universally tacky, the teens’ shallow affectations appalling. As they get more daring, and more careless, I looked forward to the inevitable end of their exploits. There’s not much about them that’s interesting. Except for Nicki, whose fait accompli notoriety eventually feeds itself into reality TV, of course. There is something funny—and tragic—about its inevitability.

But while the characters are vacant, as a look at a small selection of youth culture, the film does fascinate. You can understand why they wouldn’t feel too bad about taking from Hilton, who might not have ever noticed her precious things were missing if the kids didn’t keep going back so regularly. In this consumer world, why not take from someone who already has so much? Who’s going to care? And in the broader scheme of things, what even matters? Not much but stuff, sensation and belonging.

The film made me think about Harmony Korine’s Spring Breakers. Korine’s film is more provocative, more pushy and more sensational, but the both it and The Bling Ring do tread similar ground, exploring  an especially empty youth culture. For some reason, though I didn’t get to know them as well, I cared more for the girls in Florida.

For Hilton, who helped with the production details as well as cameoing, this film serves as a weird closed loop of self-promotion: her being a star made her a victim, and as she helps tell the story of her own victimhood, she burnishes her stardom.

But for Coppola, this material makes total sense. It continues her ongoing and compelling work of examining privilege and alienation. I hope the next time out she makes something where I really feel something for the people on screen. That hasn’t happened for awhile in her films.