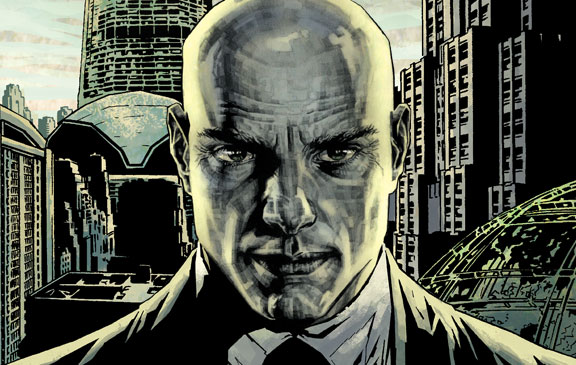 If you’ve seen Man of Steel, you probably noticed the Lexcorp oil truck get demolished in the fight between Superman and General Zod. That’s just a little reminder that Lex Luthor—billionaire, evil corporate presence and Superman’s earthling nemesis—exists in this new cinematic edition of the DC Comics character. It’s a very sure bet Lex will be the villain in the forthcoming Man of Steel sequel.

A conversation about who should play Luthor has already happened twice among my comic-reading  friends, so I’m guessing it’s happening all over the place. I just wanted to weigh in with a few casting suggestions.

My feeling is that the filmmakers have a real opportunity here. They’ve successfully rebooted an iconic character and reignited a franchise. If Man of Steel was their Batman Begins, they need to consider the next film the equivalent of The Dark Knight. Luthor may not be quite as beloved a villain as The Joker, but give the role to a brilliant performer, upend expectations, and they might come out with something really fun, really great, which, despite my overall appreciation for the film, Man of Steel fell short of.

I think they’ll want someone who might be a peer to Superman, steering clear of any generational schism. (It’s something the TV series Smallville went with, and it’s a good idea.) And they may want to avoid  someone who has so much star-wattage and onscreen experience he’ll make Henry Cavill look like wallpaper—kind of what Jack Nicholson did to Michael Keaton in Tim Burton’s Batman. (No Johnny Depp or Brad Pitt, then. Not that I think they’d do it.)

Lastly, and this might be the toughest call, someone who’ll look good bald. Someone with a great cranium.

Here are my selections. Casting agents, I expect a 10% cut if you go my way.

Though he’s already been in a Marvel superhero movie, what about Idris Elba? (And I’m talking Luthor, not Luther. ) He can do any number of accents. He was Stringer Bell, for chrissakes. He can do ruthless. Plus, he’s a big guy with a strong physical presence. A bit older than I was imagining, but an actor with a great, brooding quality is Benicio Del Toro. And while he smartly bailed out of the underwhelming Star Trek Into Darkness, that he was in play means he is considering villainous roles. Maybe if the Man of Steel sequel script is up to snuff they might lure him in. I had previously found him to be a kind of Ron Howard type, but since Drive and The Place Beyond The Pines I’ve better understood the potential for violence in Ryan Gosling. He can be dangerous, I see it now. And for a method guy like him, shaving his head should be no problem. What if they go another way, having Superman’s key villain be Alexandra Luthor? Stranger things have happened. I’d vote for Rooney Mara, based on her solid work in movies like The Girl With The Dragon Tattoo and Side Effects. A dark intensity isn’t a problem for her, that’s for sure.

And I kind of think of Luthor like a James Bond villain, a person with world-conquering ambition. If they went that way, she could have henchmen, like Metallo or Bizarro. (But that means a whole other list.) And, you know, why not Vin Diesel? He’s already follicularly challenged and he sure can be intimidating. That voice was made to say, “I want Superman dead!”