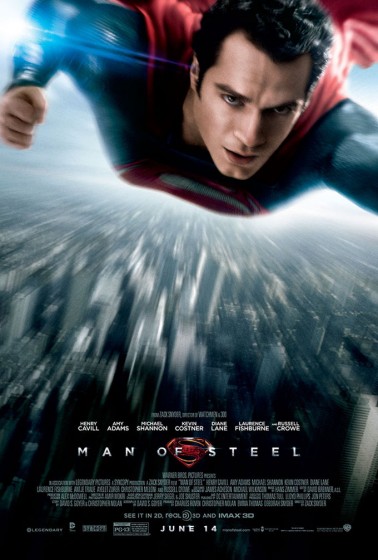 Directed by Zack Snyder
Written by David S. Goyer and Christopher Nolan
from the comic Superman created by Jerry Seigel and Joe Shuster

Superman, as Gary Engle wrote, “raises the American immigrant experience to the level of religious myth.” That’s exactly what Zack Snyder’s new feature film is going for. With myth and religion, you don’t want to be subtle; that’s certainly nothing Snyder has ever been accused of. This is heavy-handed and bombastic stuff. This is the story of an alien with god-like power introduced to America. He’s first generation.

Snyder and his collaborators have managed to do something very difficult. They’ve updated the frequently dull, goody-two-shoes, 75-year-old character for modern audiences by focussing on what works about him: an otherness that makes him a hero to the disenfranchised.

You think it’s easy to make Superman interesting to a modern movie audience? It isn’t. Ask Bryan Singer. The X-Men maestro couldn’t manage it in his Superman Returns in 2006. He got the religious iconography, but couldn’t manage to find anything about him to thrill. There’s plenty about Man of Steel I found clunky, too, but thrills? Check.

The man in the tights in 2013 is Henry Cavill, apparently a Brit but you’d wouldn’t know it. He doesn’t really seem much like a corn-fed, midwestern boy, either. But more on that later.

We start on the doomed planet of Krypton. Environmental disaster looms, and a pod-grown, genetically modified populace fights over what’s the best direction for all concerned. Jor-el (a surprisingly buff Russell Crowe) is the top scientist who bucks convention by having a child in a natural fashion with his wife, Lara (the stunning Ayelet Zurer, who plays a lot of moms, it seems: she was also pregnant for much of Spielberg’s Munich), while General Zod (Michael Shannon, typically intense) stages a coup. The technological advancements and overall design of Krypton—a more ethereal take on HR Giger— are gorgeous and strangely intuitive.

After this strong start we fast-forward 33 years. The El’s offspring is now on Earth, laying low and doing odd jobs, helping people and exploring his “special gifts”. His childhood with kindly Kansas farming folk (Kevin Costner and Diane Lane, both bringing a lot of warmth to the story) is seen largely in flashback, which really works to shake up the chronology and make a familiar story more compelling. In the present intrepid reporter Lois Lane (Amy Adams) is onto the trail of our mysterious, itinerant hero, and it isn’t long before Zod and his henchpeople show up looking for him, too.

At the halfway point of Man of Steel, I was totally engaged and ready to call this the best Superman movie I’d ever seen, my gripes the minor, nit-picky variety. I like the locomotion in the plot, the economy of storytelling. The action sequences are well shot, and Hans Zimmer’s score is appropriately majestic without aping John Williams. The supporting cast is excellent, and I especially liked how integral Lois Lane is to Superman’s coming out. Props to Richard Schiff as an earthling scientist who gets to say the doomsday dialogue, Christopher Meloni as a tough-as-nails military man, and Antje Traue as Zod’s Ursa-esque warrior woman. Great to see a few Canadians in the cast, too, probably due to Vancouver shooting: Julian “Bucky Haight” Richings and Tahmoh “Helo” Penikett.

But, by the final reel, my enthusiasm wanes considerably. And that’s not to say I didn’t enjoy myself quite a bit at Man of Steel. It is a genuine event movie, and if you like the superhero genre it’s very much worth seeing. It’s just missing some key ingredients to make it a classic.

What’s missing? Well, at the beginning of the picture I didn’t mind that our hero—who is Kal-El to his birth parents and Clark to his adoptive (Superman is a word barely spoken)—is kind of a cypher. He’s struggling with his identity, taking in all the information. It quickly becomes clear that he hasn’t got much to say, nor is he given much of a chance to express himself beyond knitting his brow. Maybe it’s partly the shadow of Christopher Reeve, the charm and likability he brought to the part, but I was disappointed that Cavill seemed to be so lacking in character. Even a touch of aw-shucks modesty would have been nice, something I associate with the unpretentious Midwest. Maybe he’ll get a bit of that in the inevitable sequel.

I wasn’t surprised by the tone of the film being so much darker and less fun than the Richard Donner original or its sequels. Purists may disagree, but I see a certain moodiness is a requirement in our post 9/11 age if you’re even going to have a shot at making Superman relevant.

But, at the same time, Snyder bashing us over the head with the tragic Christ figure stuff is a bit much. OK, we know he’s 33. OK, he’s floating in space with his arms out in the crucifixion pose. OK, Clark’s framed by an image of JC on a stained glass window. There were audible titters in the audience I saw the film with during that scene.

As Man of Steel falls into its final act it pretty much becomes all about superbeings at war causing a massive swath of urban destruction. While the battle sequences are frighteningly convincing, the 9/11 imagery is shoved down our throats to the point of pornography. I found it a bit stomach-churning, buildings falling and people covered in dust, trapped by rebar and masonry. If I had to estimate the death toll here, I’d say it was probably in the range of 100,000 people between Metropolis and Smallville.

It’s not the imagery of falling buildings that’s so awful, it’s the lack of consequence. In the early ’80s, Alan Moore—the writer of Watchmen, another of Snyder’s comic-to-film adaptations—wrote a British comic called Marvelman, changed later to Miracleman for legal reasons. In it a superhero named Kid Miracleman goes insane and murders half of London. The immense loss of life, the death, maiming of children, all of that stuff was really shocking at the time, but it felt honest. It was the obvious conclusion when superheroes go power-mad. A little like what happens with General Zod. Except here you don’t see the bodies.

Ignoring that loss of life—I know, this needs to be PG-13, but still!—feels wrong, just as it did in Star Trek: Into Darkness. Yes, Superman saves people, but at what cost? And would humanity ever forgive him for not saving more? I mean, he’s part of the visible minority who did a bad thing. There’s bound to be at least bigotry, if not outright xenophobia.

So, here’s the list for what I want in the sequel: 1) character and 2) a little humour and 3) some more depth when considering consequences. Asking too much?

And, finally, this is an inside baseball gripe, but how do the staff of the Daily Planet earn their pay if all they do is watch TV reports of events happening in their city? It would have been good if at least one of those journalists were on the phone, trying to get the story themselves.