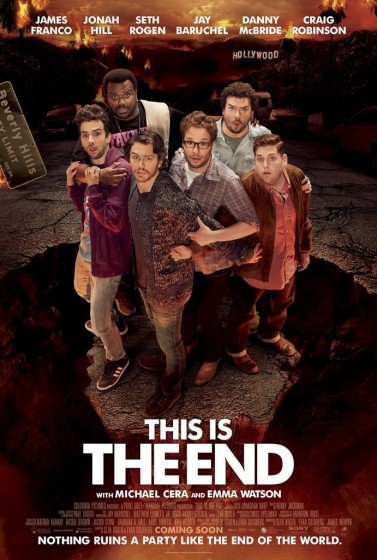 June 16, 2013 flawintheiris
Written and directed by Seth Rogen and Evan Goldberg, adapting the short film by Jason Stone, Jay and Seth vs. The Apocalypse | 107 min | Netflix and Crave Plus

This movie is quite a ride; it’s both intrinsically self-indulgent and broadly satiric, celebratory of the juvenile behaviour of men and critical of it. And while it’s nowhere near a classic, it’s a reliably funny 107 minutes.

The conceit is enough to make anyone who might be sick of the age of Judd Apatow comedy throw up in their hands: Rogen and all his costars play themselves.

We meet Rogen at LAX where he’s welcoming his old buddy Jay Baruchel back into town—or a the sullen and antisocial version of the Montreal actor, anyway. They play video games and get high and behave like teenagers in Seth’s Los Angeles pad. James Franco is having a big party that evening. Jay doesn’t really want to go because he feels out of place with all of Seth’s new Hollywood buddies—Franco, Jonah Hill, Craig Robinson—but agrees to go anyway. While they’re at the party, the world literally concludes in an extraordinarily biblical way.

The party allows the movie to provide a host of cameos, including Emma Watson and Rihanna. The best running joke—while kind of obvious—is Michael Cera as a cokehead playa.

There’s something really charming about all of this, in that knowing Hope and Crosby way. We can all imagine that—the end of the world aside—this is the actual lifestyle these guys share when they hang out. Do we really care? They hope so, and it’s a reasonable bet: movies like Knocked Up have proven, Rogen, Baruchel and his cronies have real comedic talent. Riffing on their images, making fun of privileged Hollywood buffoonery in general, while seeming to have a good time in each others’ company does serve up some solid entertainment value. And yes, for those who like it, there is plenty of low-brow body humour.

The apocalyptic scenario provides some good gags, some decent special effects and a Ghostbustery hellhound. The second act lags a bit in episodic spurts while the buddies—with the unexpected addition of Danny McBride—try to manage their new lives holed up in Franco’s bunker-like crib (which he designed himself, natch’). One does occasionally wish there was a genuine female character in the film, but I guess the guys’ inability to relate to women is part of the joke.

Anyway, This Is The End picks up in the homestretch as one of the stars has a small problem with demonic possession, another tries cannibalism, and the rest clue into the possibility of redemption. Good times.