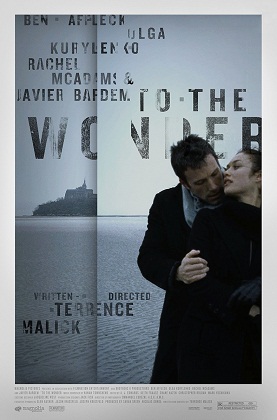 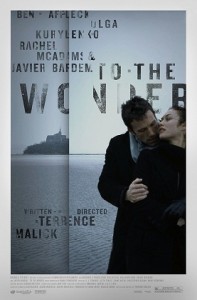 Written and directed by Terrence Malick

Cinema as poetry. This is how Malick’s last feature, The Tree of Life, was described by some. But that wasn’t half of it. To the Wonder takes that descriptor far further. And in doing so, Malick provides an astonishingly beautiful film, but one that demands a lot of attention and patience from its audience.

To the Wonder is where moviemaking and editing become one and the same. The entire film could be described as a montage. There is some “live” sound, but this film is primarily a collection of images, music, voice-over—with the occasional subtitle when characters speak a language other than English.

This is concentrated Malick. You can see the progress he’s making as he pursues sensation rather than narrative, as his themes dwarf character to the point of fragmentation. It’s a brave and beautiful effort. It’s also a very sad story, depicting a world of wonders, of uncertainty and of love that can’t withstand nature.

The plot, and I use the term lightly, follows Marina (Olga Kurylenko) and Neil (Ben Affleck), who meet and fall in love in France, their romance consummated with a visit to Mont Saint-Michel. But even there, the couple’s togetherness is pressured by nature; the tide is coming in. When Marina and her ten-year-old daughter (Tatiana Chiline) join Neil at his home in suburban Oklahoma, there’s strife from without and within. Neil’s job seems to measure industrial damage on the environment and on local residents, but there’s not much he can do for anyone. And Marina may have deep-seated emotional issues. When she leaves, Neil meets an old friend, Jane (Rachel McAdams), but will their reunion end his connection to Marina?

Malick puts his actors in the environments now becoming typical in his films; fields of tall grass, silhouetted in front of windows, wrapped in sheer curtains, running and dancing on lawns and suburban streets, all at dawn or sunset. To this collection he adds Parisienne boulevards and in a herd of buffalo.

Kurylenko is luminous. The last time a filmmaker took a camera and made love to an actor like this might have been Bernardo Bertolucci with Liv Tyler in Stealing Beauty. To the Wonder is a celebration of how Kurylenko moves, dances, and cries; her shoulders, throat, and cheeks. It’s her movie, along with those grasses, fields, and skies. Affleck’s Neil is rendered stolid, nearly silent, a masculine figure, someone for Marina to love but otherwise opaque. And while McAdams’ part is small, and I think she may only have a single line of dialogue (“I trust you”} her character is quite defined, and tragic, through her voice-overs.

We also spend time with Father Quintana (Javier Bardem), a priest struggling with god’s absence in his life and trying to find some kind of solace in helping people. His connection to the main story is tangential at best, but his thread adds more to the themes of love, nature, and faith.

For those continuing a love affair with Terrence Malick and his work, To the Wonder could be a culmination of where he’s been going, a cinematic dream. For the uninitiated, or those not predisposed, it might seem ponderous and flimsy, maybe even pretentious. I’m far more allied with the first group, though I can understand the arguments of the second. Not everyone loves poetry, right? But how sad if you don’t.