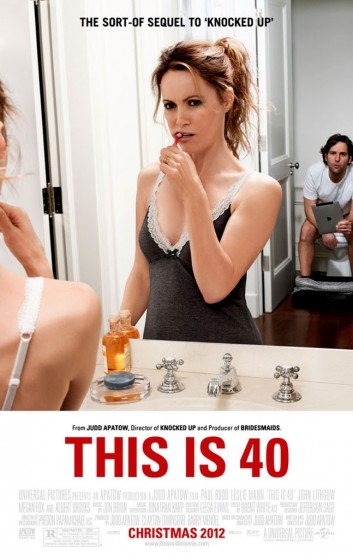 Written and directed by Judd Apatow

I think it’s OK to say that Apatow is the most influential voice in Hollywood mainstream comedy in the past decade. He paid his dues in TV with two low-rated series (Freaks and Geeks, Undeclared) that have since garnered their own cults, and has directed The 40 Year Old Virgin, Knocked Up and Funny People. Maybe his his biggest impact has come from his gig as a creative producer on everything from Anchorman: The Legend of Ron Burgundy to Superbad to Bridesmaids to Lena Dunham’s Girls for HBO. He’s his own industry now, with a great eye for talent.

This Is 40 is the “sort-of sequel” to Knocked Up, revisiting the supporting cast from that movie (without ever even mentioning the absent former lead characters played by Katherine Heigl and Seth Rogen), Pete (Paul Rudd) and Debbie (Leslie Mann), the semi-neurotic Los Angeles couple and their two daughters, Sadie (Maude Apatow) and Charlotte (Iris Apatow).

Yes, the girls are Apatow’s actual daughters and Mann is his wife, so you have to figure the humour comes from at least a semi-autobiographical place. If so, the Apatows are a smug and disconnected family with lots of money (check out their upscale LA home, BMW and SUV) and a host of first-world problems. But so what?  Let’s address the fiction.

The couple are both just turning 40, but only Pete is OK with it. Debbie can’t quite come to grips with the milestone and is telling everyone she’s actually 38, while trying to institute new household rules: better food, less tech, more togetherness. Like in Knocked Up, Pete’s still trying to get some peace in his life, but instead of secret Fantasy Football sessions he’s escaping to the bathroom with the iPad to play Scrabble. What is a secret is his indie record company (with employees played by Dunham and Chris O’Dowd) is failing, even as he represents legendary British musician Graham Parker. And Debbie’s money problems come from an employee at her boutique who’s stealing money (either the one played by Megan Fox or the other played by Charlene Yi, another holdover from Knocked Up). Of course, even though they’ve been through therapy, neither Pete nor Debbie can be completely honest with the other, which leads to more problems.

It’s interesting where Apatow chooses to mine drama in his comedy, to root it. It comes in domestic discord and from parent/children communication breakdown. Albert Brooks plays Larry, Pete’s eternally mooching father, and John Lithgow is Oliver, Debbie’s distant, surgeon father. (One of my favorite scenes is when Larry quizzes Oliver about his professional life. It feels like an outtake from the end of Broadcast News.) Both actors are great, and help bring a bit more gravitas to the proceedings. Their mature presence helps to show that Pete and Debbie’s problems are largely based on their painful inability to grow the fuck up.

I think much of Apatow’s humour, and the comedy material he’s influenced or been a part of, has to do with an inability to deal with modern life because of our culture’s universally extended adolescence. Especially in guys. Consider Adam Sandler in Funny People (or almost all of his other movies), consider Rogen and all his buddies in Knocked Up. Does Apatow’s drawing laughs from that theme punch holes in it or just add to its annoying ubiquity? I don’t know for sure, but I do know I have enjoyed Apatow’s smarts, even as his worldview is pretty narrow—the Woody Allen argument, Los Angeles chapter—and I enjoyed This Is 40.

I have plenty of time for Rudd as an onscreen presence. He’s become a kind of American Hugh Grant, an everyman irresistible to women. You plug him into pretty much any movie and he’s adorable. And Mann has great comic timing. Their affability goes a long way to making their characters’ bad behavior and selfishness bearable, and allows for a lot of comic frisson. Scriptwriter Apatow has a great way with a savvy, culture-aware punchline.

For the record, my biggest gripe with Apatow the director (and this was even more true in Funny People that here) is his inability to pace his features. This Is 40 is 134-minutes long. In its running time is a punchy 100-minute comedy with a little over half-an-hour of material that just sits there, getting flabby. This is where Apatow could really learn from Allen, who regularly clocks his comedies at 90 minutes. He knows with comedy you need to run and gun. You can still find weight and truth in that running time, but Apatow needs to be more merciless with his cutting. It must be tough when his performers are all his nearest and dearest, but there is plenty of stuff here that could have found its way into the Blu-Ray outtakes. Pete and Debbie’s respective business’ money issues could have been left out, or, at least, one of the two; more time for the kids and the familial issues, where the laughs were more consistent. The daughters are delightful and more time could have been spent with them.

But did I laugh? Did I, occasionally, recognize my own first-world problems? Yup, I sure did, on both counts. 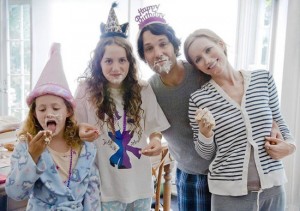