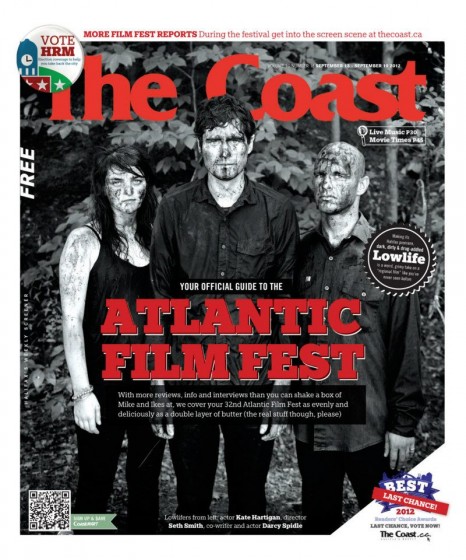 It’s “Christmas for Carsten,” as a friend of mine called it. I’ve been attending and/or writing about The Atlantic Film Festival since 2003. Invariably I see at least one film that blows me away, something I wouldn’t have seen otherwise at the local multiplex monopoly.

For those who don’t know, the AFF is an annual event, much beloved here in Halifax. It makes this city of some 300,000 feel much larger, it stuffs the local cinemas full of people and every night there’s another party to attend. (For more information and schedules, go here.)

This year it’s notably smaller than previous years, seven days instead of 10. A former employee of the festival told me the fest has been struggling with an operational deficit, and this year’s scaled-back edition is one of the ways they’re addressing that problem. In 2007 they has almost 250 films through that 10-day stretch. Since 2009 the number of films screened has been diminishing, but last year, festival director Lia Rinaldo told me their focused multimedia approach had earned a much bigger return at the box office. That said, as with all arts festivals, ticket sales don’t nearly pay for everything. There needs to be continued investment from provincial and federal bodies, as well as private corporations. Glad to see Rogers is still a presence at the festival this year with their Special Presentations. I hope the AFF can still sustain the quality of programming and events this year and in the years to come. I know they have a terrific staff and army of volunteers. I, for one, don’t think keeping it at just seven days is necessarily a bad thing. I’m pretty much wiped out by the second weekend, anyway.

I’m thrilled the headquarters of the AFF is back at the Lord Nelson, rather than the Delta. Not that there’s anything wrong with the Delta, its just not located anywhere near where most of the films are taking place, the Park Lane Cinemas, whereas the Lord Nelson backs onto the Park Lane Mall. Much more handy.

This morning when I went to pick up my delegate pass and information, I ran into some other festival attendees in the Lord Nelson lobby. We were told by the front desk to head up to the third floor to collect our stuff. That was not where we needed to go. I felt a bit like the band in This Is Spinal Tap. “Rock n’ Roll, Cleveland!”… as we wandered in and out of elevators and hallways. Eventually we found our way to the registration counter, which is up the stairs to the right of the hotel lobby (for anyone else reading this looking for the place). A tip to the organizers: signage is key.

The Opening Gala bash, the big party that everyone wants to go to happens tonight at the Cunard Centre. That’s a roomier locale for it than last year’s event at the Dirty O, the north end’s Olympic Centre, which was a very humid and rainy evening, making the venue feel like a sauna. In years past the party has rocked the Citadel (awesome!), the Metro Centre (felt like a high school dance, especially for those of us of a certain age because Canadian metal gods of yesteryear, Helix, performed) and, best of all, right on Argyle Street, where they closed off a block and brought in Buck 65 one year. I heard conflicting reports as to why the party could no longer be held there. One reason: because of the possibility of rain ruining things. That’s fair enough. Another possible reason: a source told me the local merchants wanted too much money to make it feasible. Blurg.

So, now we have the Cunard Centre: I reserve my judgment until tonight—despite the bad carpet and generic conference centre vibe, I’ve seen some great concerts in that room (The White Stripes and Queens of the Stone Age). Should work for a party.

For this year’s festival I’ve already seen a few films and written about them for The Coast. 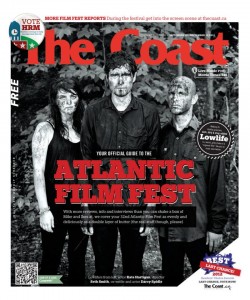 Please click here for my story on Jason Buxton, writer-director of the feature film Blackbird, click here for my look at Danish cinema, and here for a selection of reviews of films playing at the festival, some of which I wrote! (So far, my favourite of the pre-screened pictures has been Sarah Polley’s Stories We Tell. For a little background information on this fascinating and intimate documentary, check out the filmmaker’s post here.) 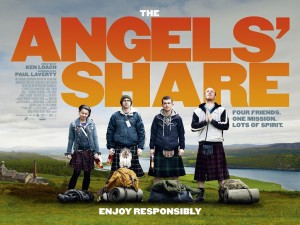 The opening night movie is Ken Loach’s The Angel’s Share. Loach is a UK filmmaker, an internationally renowned director of political and socially realistic films, my favourite of which was The Wind That Shakes the Barley, another picture that screened at the AFF.

As usual, I’ll be seeing as many films as my schedule and mental health will allow during the festival. I hope everyone enjoys themselves. I’ll see you at the movies.