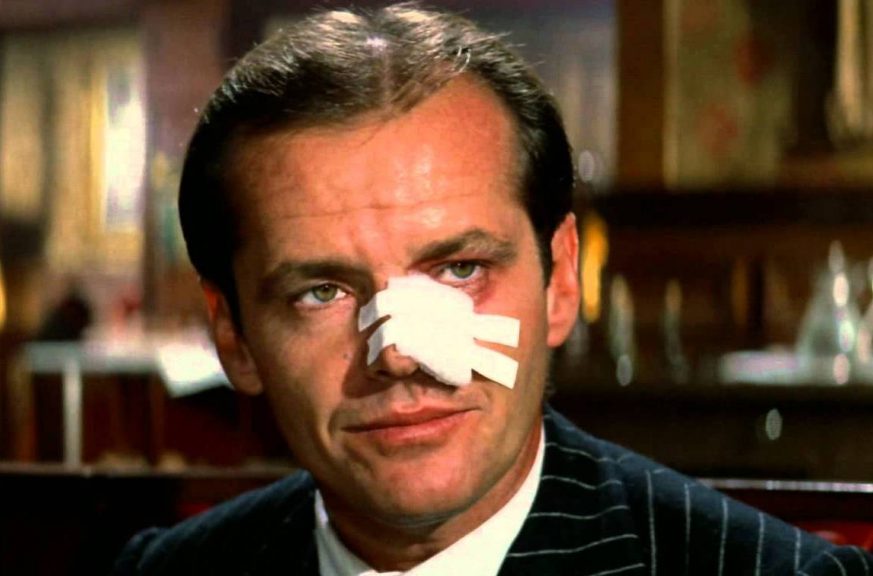 Jack Nicholson has had an enviable career. He’s been an A-List actor and leading man for so long he’s practicality carved out of stone on Mount Rushmore. His leering mug for years was a staple of the front row at the Oscar telecast — though, interestingly, not recently. Maybe he’s in semi-retirement, having gone way OTT in The Departed, underwhelming in James L. Brooks’ How Do You Know, and even shown up in an Adam Sandler picture — Anger Management.

He’s had some fun lately, but I don’t get the impression he needs the work anymore.

He doesn’t have much left to prove, is the thing. He became a star in his 30s with an Oscar-nominated role in the counter-culture classic Easy Rider. Since then he’s worked as a writer, director and actor, and is a three-time Oscar winner (Best Actor for One Flew Over The Cuckoo’s Nest and As Good As It Gets and Best Supporting Actor for Terms of Endearment). He’s worked with the world’s greatest directors, from Stanley Kubrick (The Shining) to Tim Burton (Batman) to Alexander Payne (About Schmidt).

I’ve been a fan of his since I was a teenager, and I’ve seen almost every movie he’s made. With a guy so well-known for his iconic roles (see above), I tip my hat to those but would also like to mention a few of his lesser-known parts, movies that may have escaped broader recognition.

One thing about Nicholson, he’s never been afraid to take supporting roles in films if he thinks he can shine (witness A Few Good Men). I’ll mention a couple of those, too. 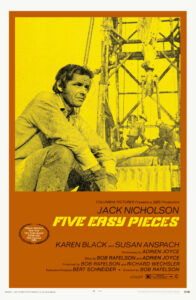 Five Easy Pieces
“Bobby Eroica Dupea”
This is one of those movies that if you find it when you’re young, it could resonate powerfully, the way that Catcher In The Rye needs to be read when you’re a teenager. Find it later and Holden Caulfield seems a spoiled brat. See Five Easy Pieces too late and Bobby could appear as a bit of a self-involved goon. I saw it when I was under the age of 18 and it spoke to me. Bobby is angry and contrary, working in oil rigs and ignoring is background of privilege, as well as his talent as a pianist. That seems kind of heroic, in a strange way. The film does have some interesting things to say about class in America and contains at least one spectacular scene, the one in the diner where Bobby loses his cool with a waitress. People love his anger and refusal to compromise when he orders something very specific. There’s a key line said in the scene after, though: “Well, I didn’t get it, did I?” 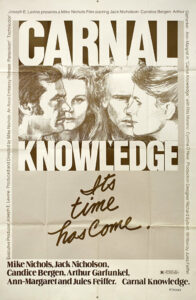 Carnal Knowledge
“Jonathan”
We follow the lives of two college roomies, Jonathan and Sandy (Art Garfunkel) as they navigate their personal and professional challenges into adulthood. They’re both mostly interested in women, though of the two Jonathan is more boorish, more aggressive while Sandy is more reflective. This is borne out over the decades of their friendship and failing relationships. Nicholson takes his character to places a lot of leading men wouldn’t have dared, to a place where he is truly loathsome. And Garfunkel is every bit his equal in performance. Paul Simon may get credit for all those songs, but Garfunkel is a talented film performer (see also Bad Timing) who I wish worked more often. 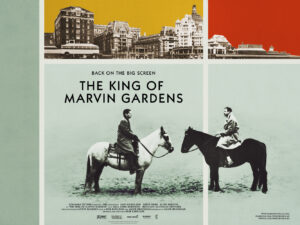 The King of Marvin Gardens
“David Staebler”
Now we look back at this film and think Nicholson is playing against type, though in 1972 he was yet to have a type. Here he’s the Philadelphia-based brother to Jason Staebler (Bruce Dern), a big-dreaming fast-talker, looking to invest in a tropical resort and in Atlantic City in the off-season in order to drum up some financing. David is the reserved, bespectacled one who does late-night broadcasting and takes care of their grandfather. This movie I would call a comedy, though a dark one, played out with decaying boardwalks and white elephant venues as its backdrop. All the performers are amazing here, though I think Ellen Burstyn as the emotionally fragile Sally takes the cake. She was never better than in this role. 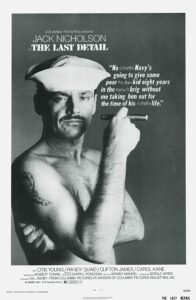 The Last Detail
“Billy ‘Badass’ Buddusky”
This feels like a little, indie picture, though one of those intimate ones adored by lovers of American cinema of the 1970s. It’s bleak and grey, but very moving. Buddusky and Mulhall (Otis Young) are Navy men, a Norfolk, Virginia shore patrol charged with taking a young sailor, Meadows (Randy Quaid), to the brig in New Hampshire for an eight year sentence for a petty crime. They’ve got some time to get there so the two older men show their charge a good time. That means getting him drunk and getting him laid. But this movie isn’t a party, it’s about injustice and it’s about duty. 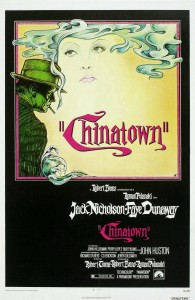 Chinatown
“JJ Gittes”
Not much to be said about this film that hasn’t already been said, beyond that it’s deserving of all the accolades it’s received over the years. It’s one of my favourite films of all time, due to its merciless conclusion, creeping sense of dread and to the partnership of screenwriter Robert Towne and director Roman Polanski. And, of course, Nicholson, who is peaking at this point in his career. 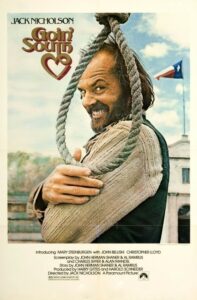 Goin’ South
“Henry Lloyd Moon”
Nicholson has directed a few features, and maybe none more fun than this comedy western, in which he also stars. An inveterate outlaw and thief, Moon is about to be lynched when we meet him, but is saved by a woman, Julia (Mary Steenburgen, lovely and hilarious) who agrees to marry him to spare his life. Julia needs his help to work a goldmine on her property, but, of course, their relationship develops over time from combative to something else. 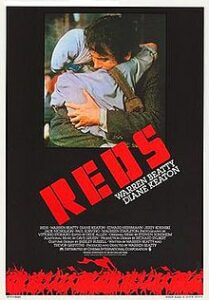 Reds
“Eugene O’Neill”
Yes, Nicholson plays the famed American playwright in Warren Beatty’s masterpiece, a movie that couldn’t have been easy to make early in the Reagan years, about the role an American writer, John Reed (Beatty), played in the Russian Revolution. 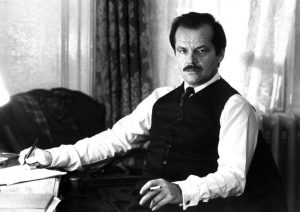 Nicholson at this point had evidenced a great deal of loyalty to his friends in Hollywood and continues to do so to this day. I’ve got to think that Beatty asked him to take this relatively small role in Reds, certainly not for the money, but because he thought his buddy was right for it. Maybe as a favour. Nicholson and Diane Keaton have great chemistry, too. 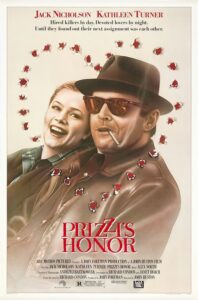 Prizzi’s Honor
“Charley Partanna”
Nicholson had been dating Angelica Huston for years by the time he did Prizzi’s Honor, at least since he worked with the film’s director John Huston in Chinatown, where John played Noah Cross. He finally got a chance to be directed by John here, while acting opposite John’s daughter, his girlfriend. And it was Angelica who won the Academy Award for Best Supporting Actress. The story is about an Italian crime family and its adoptive son, Charley, who does hits for them. He falls for a woman in the business, too, Irene Walker (Kathleen Turner), which eventually puts them at odds with each other. This is a great role for Nicholson, different in that he’s street savvy but none too bright, stuffing his upper lip with cotton the way Brando did in The Godfather. 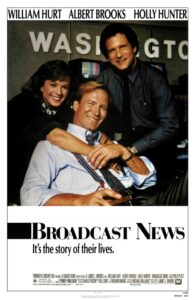 Broadcast News
“Bill Rorich”
I could have mentioned the Witches of Eastwick, the gregarious magical comedy from Mad Max director George Miller, also starring Michelle Pfeiffer, Susan Sarandon and Cher, or Ironweed, where Nicholson played opposite the marvellous Meryl Streep and Tom Waits, both great movies from his late-’80s period, but I decided on Broadcast News because it’s a blink-and-you’ll-miss-it role that shows how potent his onscreen presence can be. Nicholson has all of three minutes of screen time as the imperious head anchor in this national news station where the lead characters played by Holly Hunter, Albert Brooks and William Hurt work. His presence doesn’t capsize the film from sheer stunt casting, but it does show how easy he makes star quality look, even in the presence of performers who are no slouches in the magnetism department. James L. Brooks directs again, who worked with Nicholson in Terms of Endearment, and if you see a trailer, notice that Nicholson is no part of the promotional material for this film. 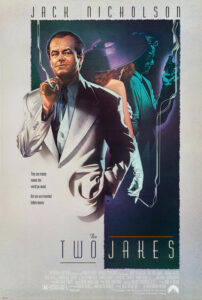 The Two Jakes
“JJ Gittes”
This was a gutsy move. Get the original screenwriter from Chinatown to write a sequel, then direct and star in it yourself. This is what Nicholson did in 1990, even as he was tipping the scales at almost an unhealthy weight. (Hey, it’s not my habit to comment on the bodies of actors, but it’s pretty obvious Nicholson’s lifestyle around making this movie was unhealthy. He smoked, too!) I’m one of the few fans of the picture. Critics were unkind, and while I do agree that he took on too much, as a follow-up to an almost perfect film, Nicholson did pretty damn well. In it, private dick and war hero JJ Gittes (Nicholson), or Jake, is hired by developer Jake Berman (Harvey Keitel) to catch his wife in an adulterous act. The voice-over is disappointing, and the picture never quite manages the same sense of dread that bled from its predecessor. But the sense of place, the twisty drama and the performances (also including Meg Tilly and Madeline Stowe) make it very much worth a look and better than they all said. There was talk of a third, final film. I doubt they’ll make it, but I wish they would.