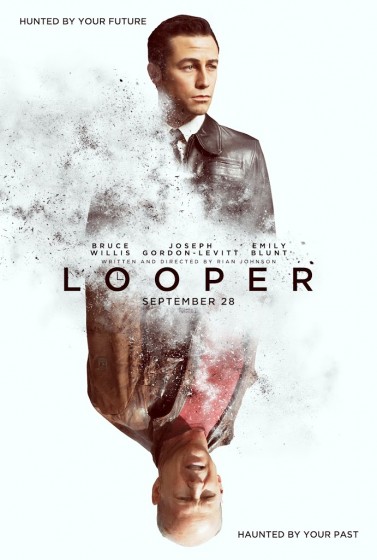 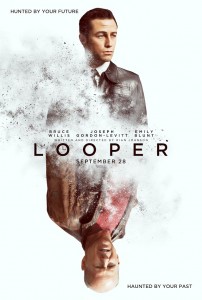 Written and directed by Rian Johnson

Remember the question that came up in Dead Zone? The one where Johnny Smith (Christopher Walken) asks his doctor friend (Herbert Lom) if he had the power to go back in time and kill Adolf Hitler, would he? And his friend says yes, absolutely, or something to that effect. There’s an interesting take on that conundrum in Looper, a science fiction time-travel actioner that runs with a solid premise in a believable future world, though not without stumbling a little.

The very busy Joseph Gordon-Levitt (here convincingly reconstructed to look like Bruce Willis) is Joe, a Looper. In 2044, that’s a hired killer. Further in the future, when time travel has been invented, it’s very difficult to get rid of bodies due to tracing tech. So the crime syndicate of that era send their enemies back in time where they’re instantly disposed of by Loopers, these guys with their skinny ties and old-fashioned blunderbusses. Problem solved. The thing is, the syndicate, who set up this handy system by sending one of their own people, Abe (Jeff Daniels in easygoing, full whisker mode), back to manage it, don’t like loose ends. At a certain point they catch up with their Loopers and send them back to be killed by themselves, thereby closing the loop. Loopers don’t mind, because when they do this they’re paid handsomely, a presumptive retirement stash. As Joe remarks in his handy, explanatory voice-over, people who get into this business don’t have much perspective.

How time travel is invented isn’t explained… the science of it is all fuzzy. Also, a few folks are TKs, telekinetic people who can float quarters over their palms, but not much else. No explanation as to how that happens, or even why it’s in the movie at all, but you can bet that like a gun put in a drawer in a movie’s first act will be used to shoot someone in the third, the introduction of superpowers as a plot detail early on means there’s a good chance we’re going all Akira late in the game.

But what a first act! We flip between Kansas cornfields and the future Kansas City skyscrapers, flying motorcycles and a cruel, unfeeling society, where the the streets are full of “vagrants” and life is cheap. Strippers are all prostitutes, too (as evidenced by Piper Perabo’s character). The world of the Loopers is very well defined, and given Johnson’s zippy directorial style (honed on his previous films Brick and The Brothers Bloom) we get a really good sense of its gritty nooks and expansive horizons.

But when 50+ Old Joe (Willis) shows up, and young Joe doesn’t close his loop, everyone is trying to kill everyone, and everyone is especially motivated, mostly by the love of a woman. The issue with time-travel movies is usually that it’s very difficult to avoid stepping into some kind of paradox, and full marks to Johnson for nimbly dancing around that very problem, all the while serving up a number of seriously satisfying action set-pieces along with characters we care about.

Sara (Emily Blunt, rocking a flawless American accent) is one of those characters, raising her son Cid (Pierre Gagnon) on a farm right out of Field of Dreams. It’s Joe who pieces together that Cid might be a target of his older self—the reasons for this will become clear.

And here’s where Looper goes soft in the middle. Not that Blunt isn’t a welcome presence, she always is, but as Sara and Joe start to get to know each other, they start speaking in a way that helps define the themes of the movie, rather than in a way that sounds natural for their characters. I call this “writery dialogue,” and as soon as it shows up it jabs me out of my enjoyment of a picture a little. It doesn’t help that this draggy bit loses a lot of the momentum and action of the opening section.

Fortunately, it doesn’t last long. There’s a dynamite sequence punctuated by a lot of machine gunning as Old Joe unleashes a bit of payback on his former employers. And there’s a nice bit of redemption that wraps things up, though for a time travel movie there isn’t a lot of end-of-tale twists.

Overall, despite a lull or two, Looper impresses with the deftness of its direction and for providing a few new ideas to the canon of time travel action pictures, including a great montage envisioning a possible future. Gordon-Levitt and Willis convince playing the same character at different ages and the supporting cast (including Paul Dano) shine.

And at a time where independent, brand-free genre pictures like this are few and far between, Johnson’s skill as a time bandit is very welcome.