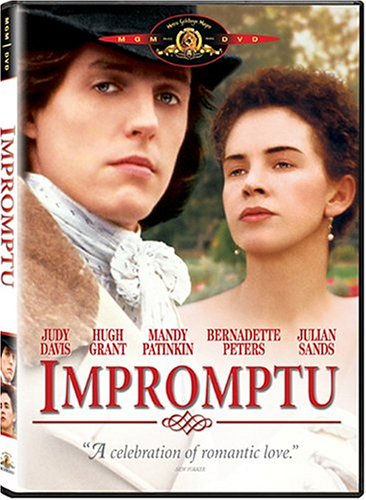 Welcome to a new occasional feature on Flaw In The Iris.

A Cult of One is where I go into my vault and write about unheralded films, generally unloved and unpopular. My point: they’re just misunderstood and deserve a fanbase… I mean besides just me (and maybe a very few others). Please indulge me.

I stumbled across Impromptu during my undergrad years. It swiftly joined movies such as Withnail & I, Heathers and La Femme Nikita as go-to choices for multiple viewings. Anyone who reads this blog regularly knows that one of my strongest criteria for quality in film is its “rewatchability,” that it remains a joy often revealing deeper pleasures the more times you see it.

Impromptu has a couple of connections to Withnail & I, for fans of that cult classic: it stars the excellent character actor Ralph Brown — who was Danny The Headhunter in Withnail — as the painter Eugene Delacroix. Also, in Richard E. Grant’s memoir With Nails, the former Withnail has dinner in Paris with Hugh Grant (no relation, as far as I know) and Elizabeth Hurley, and Hugh describes Impromptu as “Euro-pud,” a collection of European actors with different accents and different acting styles all thrown together in a cinematic pudding. I don’t think it was a compliment.

So, how good could it be if one of its leads doesn’t think much of the project? Very fine, IMHO.

Set in Paris and its environs circa 1835, Impromptu is a light, somewhat frothy comedy based on the true story of Baroness Amantine-Lucile-Aurore Dupin (Judy Davis), who made her name by writing popular, low-brow romances under the pen name George Sand and taking a series of famous lovers, including writer Alfred Du Musset (Mandy Patinkin). Using a man’s name for her work she also enjoyed wearing men’s clothes, further increasing her infamy. 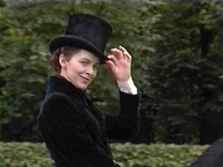 When we meet her she’s recently divorced and looking for a way to escape the unwelcome attentions of her most current dalliance, the tutor of her two children, Mallefille (Georges Corraface).

She overhears the music of Frederic Chopin (Hugh Grant) and, discovering the Polish composer is to be the guest of a wealthy duchess (Emma Thompson) for a fortnight in the country — along with other friends of hers, including Franz Liszt (Julian Sands) and Marie D’Agoult (Bernadette Peters) — she invites herself along, hoping to meet the composer whose music has captured her heart.

What surprises her is, in contrast to her own forthright nature, Chopin is fragile and fey, hobbled by a chronic tubercular cough. Also, Marie has her own motivations for quashing George’s romantic intentions.

Though the artists, writers and musicians are all self-involved to a fault, the film revels in their decadence and humour. The section of the picture where they go out to the French countryside is the most fun and the film really shines in Kernochan’s witty wordplay. There are about a dozen absolutely perfect zingers scattered throughout the movie, none of which I will spoil here.

There’s no saying how historically accurate the film is, but it certainly made me want to learn more about the real people behind the story, and maybe even read some of Sand’s novels. I don’t think you watch Impromptu for accuracy, rather for a bit of a period romp and the glamour of watching characters who were the celebrities of their day, behaving badly, for the most part.

Judy Davis remains a favourite of mine, largely due to the work she does in this movie.

She makes George totally compelling, incisive and attractive, even as she plays up her coarser, roguish qualities. And Hugh Grant, here appearing before Four Weddings and a Funeral made him a household name, is quite the damp squib. Charming, but certainly playing a character different from his later specialty, the befuddled Englishman irresistible to Americans. Or anyone, really. 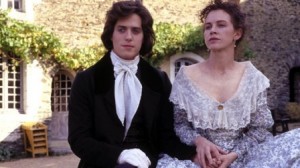 The rest of the cast, despite the questionable accents and Euro-pud style make for a group with whom you can’t help but enjoy spending time. And Mandy Patinkin, though not given a whole bunch of onscreen time, has the lion’s share of terrific dialogue.