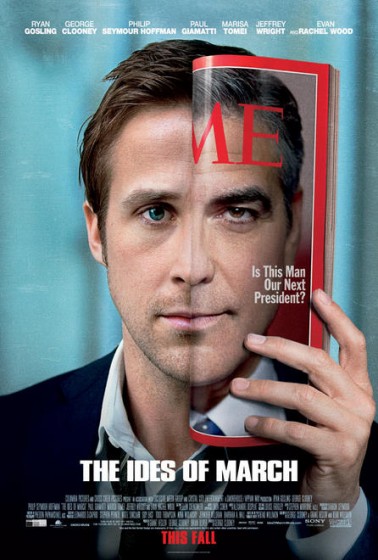 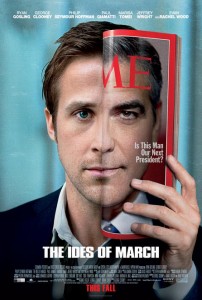 Directed by George Clooney
Written by Clooney, Grant Heslov and
Beau Willimon, based on the play Farragut North by Willimon

Maybe that’s not fair. Because, lets face it, Sorkin is the king of political thrillers. Even when they’re actually about sports, like Moneyball, or about crazy zeitgeist-chasing technology, like The Social Network, he stands above all the rest. We’ve known that since A Few Good Men and The American President, which was kind of a pilot for his game-changing series, The West Wing.

It’s very hard to not think about The West Wing when watching any drama based in American politics, because that’s what everything has to live up to. And The Ides of March, while a tense and well-made movie, isn’t as good as The West Wing.

I’d even say it misses being as good as Primary Colors, the much maligned political drama based on a book about Bill Clinton’s first presidential campaign (that I liked). Even though The Ides of March is also based on other material, this time a play, which itself was loosely based on the 2004 Democratic primary campaign of Howard Dean. But in this comparison, Clooney’s movie suffers simply for timing. The Mike Nichols film came out while Clinton was still in office, and felt much more current as a result, where The Ides of March feels a bit naive for 2011.

In it, Ryan Gosling is Stephen Myers, a hotshot junior campaign manager for Democratic candidate Mike Morris (George Clooney, here serving as writer, director and actor—impressive). Gosling is typically watchable, though I felt more affection for his other leading characters in Drive and Crazy, Stupid, Love this year. Stephen Myers is more like someone Tom Cruise would have played 25 years ago. Myers says right off the bat that he’s a political idealist: versus senior campaign manager Paul Zara (Philip Seymour Hoffman, typically miserable) who will do anything to win, Myers will do anything to win so long as he believes in the cause.

They’re in Ohio, looking for the endorsement of a key politico (Jeffrey Wright). And, one evening, Myers gets an indiscreet offer from an intern, Molly Stearns (Evan Rachel Wood, hitting well above her average here), and takes her up on it. And through her, Myers discovers some dirt on candidate Morris, something that will force him to question whether he’s really fighting the good fight. It doesn’t help that Myers takes a meeting with a rival campaign manager, Tom Duffy, which puts him in bad stead with his own boss, Zara.

There’s plenty of good stuff here. Clooney runs a tight little ship, in the narrative and in his casting: everyone is excellent, including support from Marisa Tomei as a political reporter Ida Horowicz who reminds Myers that the press can both give and take away, that they are responsible to their readers, not their “friendships.”And there’s a moment where Myers meets Morris in a face-to-face in a darkened restaurant when the picture almost goes laterally into thriller territory, where I thought we were going to get into a conspiracy involving the cover-up of a murder. But it instead rests on the drama of Myers’ values—how different he might be from his candidate—and what he will do with the information he has.

And, unfortunately, the drama is a little stale, and that speaks to the timing. Even when the play this is based on came out in 2008, it must have seemed creaky. The Clinton presidency was the era of sexual misconduct, an element of the plot here. Makes you think of John Edwards, too. And, lets face it, Clinton recovered, and Edwards sins against his supporters and his cancer-stricken wife were worse than anything Morris does in this story.

When the real political dirt is nastier than the dirt we see in a Hollywood drama, then the drama, even one as well constructed as this one, isn’t in tune with the times.