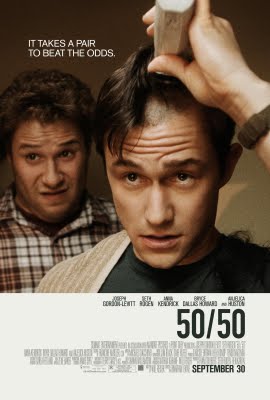 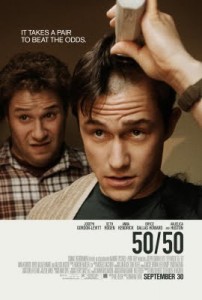 Directed by Jonathan Levine
Written by Will Reiser

This picture was a bit of a surprise.

In it, Joseph Gordon-Levitt is Adam, a 27-year-old guy who works in news radio. He’s slim and healthy, runs in the morning through scenic Seattle—definitely Vancouver standing in through some shots—though suffers from a chronic backache. Turns out he has a malignant tumour, a rare kind of cancer creeping down his spine.

His life changes, suddenly, as you can imagine. He starts to go to chemo sessions, where he meets Mitch (Matt Frewer) and Alan (Philip Baker Hall) and attends therapy with a doctoral student, Katherine (the adorable Anna Kendrick) with whom there’s plenty of chemistry, challenging her professional objectivity. She’s also pretty new at this therapy thing, only being 24. Meanwhile, Adam is seeing Rachael (Bryce Dallas Howard, laying it on a bit thick), who is clearly having trouble dealing with her boyfriend’s illness. She knows what a good person in this situation is expected to do, but she may not entirely be successful meeting those expectations. Or at all.

All the while Adam is hanging with his buddy Kyle, played by Seth Rogen. This is the quintessential Seth Rogen part: dynamite comedy relief produced from regular, tasteless comments and general boorishness. But, of course, delivered in such a charming way, you can’t not like the guy. It turns out that in real life Rogen is a good friend of the screenwriter, Reiser, who wrote the story based on his own experiences battling cancer in his 20s. So, are we to assume Rogen is just playing a version of himself? This isn’t a leap.

Reiser has experience as a television producer, and his narrative economy very much feels like the product of American TV. That’s not a slight, it’s just a recognition of the kind of movie this is: the structure has no surprises and will only take you so deep, something I recognized right away that put me off at first. But in the end, it’s the performers who elevate the material, and director Levine sets it all up in a way that’s not cloying or sentimental, which won me over.

The actors are all on their A game. This could have been a touching love story/romantic comedy if it had taken more of the Love And Other Drugs route and we’d spent more time with Adam and Katherine, but really it’s just about Adam dealing with his illness at such a young age. And that’s also not a slight: Gordon-Levitt is solid as he always is—and 50/50 is much better than Love And Other Drugs, though maybe slightly less ambitious. Adam is a soft-spoken guy in scary circumstances, and he deals with it as many of us would: first in shock, then acceptance, anger, fear… we see it all. And Rogen is great, with just the right amount of seriousness injected into his comic persona. With Funny People and Take This Waltz, he’s really making some good choices to show his dramatic range.

Oh, and in support, the wonderful Anjelica Huston, as Adam’s mother. Great to see her, as always.

What impresses most here is that within a fairly standard structure is a heartfelt story with more than its fair share of well-earned laughs. 50/50 is more than Adam’s chances, it’s a nice indicator of the tone of things, comedy to pathos, and a real success as a result.