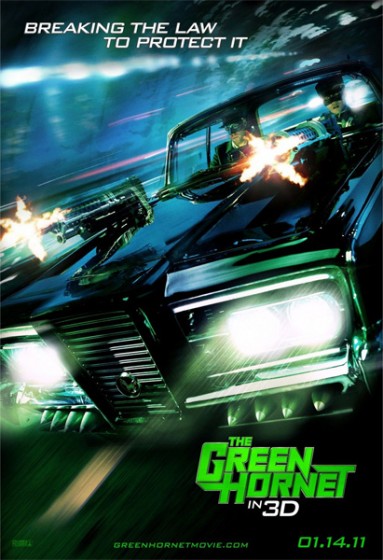 OK, so I know some folks who read this thing must be wondering when I’m going to get to my Top 10 of 2010. What do you think I’ve been doing? I’ve been watching movies! Getting caught up, doncha know. I hope to have the list out by early next week. I warned you it would be late.

OK then, without further ado… You gotta give Rogen credit here for trying to set up his own superhero franchise, as well as dropping all the weight to achieve at least a partly plausible action hero.

This material is based on a radio serial that became a comic, a film serial and a single-season TV show. The hero is Britt Reid, journalist, who uses his nights to become a vigilante called The Green Hornet, with kung fu expert Kato at his side, driving a car dubbed Black Beauty. The TV show is famed mostly for having starred Bruce Lee as Kato. No one remembers who played Reid. (It was Van Williams.)

So, in this update on the character, Reid (Rogen) is the n’er do well son of the a famed newsman, played with grump by Tom Wilkinson. Reid Junior is a partier who never got the love he needed from dad and therefore never bothered to make anything of himself. That’s about as deep as the psychological assessment goes. But when dad dies, Britt inherits his father’s newspaper, clashing with the editor Axford, played by Edward James Olmos. His eyes are also opened to who makes his beloved morning coffee: Kato (Jay Chou), whose skills in mechanics, engineering, inventing and martial arts pretty much make him a superman. For some reason Kato—who should be leading a physics think tank in California somewhere—puts up with Reid and they become pals. Eventually they get the idea to don masks and fight crime, to make a difference. Or some such thing. Kato soups up a ’65 Chrysler Imperial with machine guns, they get costumes and a handle and away they go.

Further complicating things is Reid’s hiring an assistant at the newspaper, Lenore (Cameron Diaz, who appears in so little of the marketing for this film I was shocked to see her in it), setting up a love triangle with Kato. Kind of.

Oh, and the villain? Christoph Waltz as Chudnofsky, the mildly amusing LA crime lord with some real insecurities about his ability to intimidate his enemies.

Tonally, The Green Hornet is all over the place. There’s a real comedic streak here: this Hornet’s no brooding Dark Knight. No surprise then that Rogen gives himself all the best lines, though there are jokes that fall completely flat, for example when Reid muses about Lenore’s age during the job interview. Credit to Diaz; she maintains her dignity and reminds us she’s a talented comedic presence. But it’s just a weird little movie that way, a hodgepodge of balls-out comedy cut with brief dramatic scenes, tied together by big-budget action set-pieces. For the most part, it doesn’t fail to entertain, but one can’t help but wonder, why would quirkmaster Michel Gondry be interested in this lowbrow silliness? The good news for him is the first weekend’s box office guarantees he’ll keep working in Hollywood.

And I was surprised how capable Rogen was as a heroic figure, despite being this goofball. I was kind of expecting it to be more like Michael Caine in Without A Clue, where he played the thickest Sherlock Holmes ever, with his Watson, Ben Kingsley, the clever one. Though Kato is startlingly capable—he even has a guidance system in his brain that allows him to move at a different speed than everyone around him, so even outnumbered he hardly breaks a sweat defeating the baddies—he never makes Reid look totally useless.

One of the highlights is a mid-movie fight between Kato and Reid, where Reid actually bests Kato. It seems an impossibility, given Kato’s skill, but it’s actually very funny, perhaps unintentionally referencing the Peter Sellers Pink Panther pictures, where Sellers’ Clouseau is constantly being attacked by his butler, also named Kato. Hmmm.

Bottom line: The car is the real star.