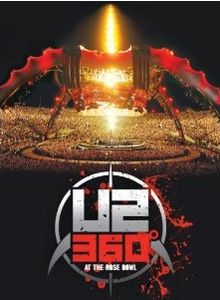 I’ve been a longtime fan of the Irish band U2. I guess by some estimates I’m a latecomer, having gotten into them on Rattle and Hum, but I swiftly purchased the back catalogue and have enjoyed every record since. They still amaze me with their consistence. Like Springsteen, I do believe they want to make the best record of their career every time they go into the studio. They have crazy faith in their abilities and it shines in their work.

I saw them on the Popmart tour at the former Skydome in Toronto. I was one of the few that really liked the Pop record, but I found the giant screen and fast-food culture accoutrement highly impersonal. It was the last stadium show I ever went to. The band made it up to me with the Elevation Tour in 2001. A much more intimate gig—if you can say that about a show in a hockey arena—it really impressed me, though the record they were touring behind, All That You Can’t Leave Behind, I found to be a bit of a bore aside from the singles.

Critics adored their newest record, No Line on the Horizon, as did I. I know it hasn’t done the business of some of their previous work. That’s probably at least partly due to the singles not setting the world on fire.

Now, I’m one of the people who admire the band most when they play past the edge of their comfort zone. I loved Zooropa. And the new record features sounds I haven’t heard from them before, exciting stuff. But I think when they take chances they also fail bigger. I thought Zooropa had some of their best and worst songs on it, and the same could be said of this new one.

But the band’s live experience is a whole other part of what they do. They’re an earnest, spiritual foursome, and they sweat to provide an emotional experience for their audience. It’s part concert, part church congregation. They really try to provide a narrative to the show, where the sequence of songs makes sense in how they feel together. I was curious to see how they’d do it this time, with these new songs and their giant arachnid-like stage set-up in the round.

They open with “Get On Your Boots,” a pop single that goes for the same adrenalized crunch as “Discotheque” and “Vertigo” but doesn’t quite make it, despite a “Watching The Detectives” -styled post-punk hook. However, “Magnificent,””Mysterious Ways,” and “Beautiful Day” in quick succession do the trick.

And of the new songs I do like, “No Line on the Horizon” is aggressive in all the right ways, favourably compared to “The Fly” from Achtung Baby. The entire band singing harmonies on “Unknown Caller” gives me chills, and I love the mundane technobabble in the lyrics. And their return to the back catalogue to play “The Unforgettable Fire,” and “Until The End of the World” are inspired choices.

What didn’t work for me is the segue between my least favourite song on the new record, “I’ll Go Crazy If I Don’t Go Crazy Tonight” and “Sunday Bloody Sunday.” These songs come from the opposite emotional poles the band is capable of reaching, and I could hear worlds fracturing when one ended and the other began.

Also, it wouldn’t be U2 if Bono didn’t do at least one embarrassing thing. I love him for his shamelessness and how he really takes his role as a rock star with a delightful combination of irreverence and seriousness. But he always manages to annoy me somewhere along the way. Here it’s his playing a solo guitar version of “Amazing Grace” as a lead-in to “Where The Streets Have No Name.” It’s just way too on-the-nose for me, where ambition bites the nails of pretense, to paraphrase one of U2s more evocative lyrical couplets.

But it’s in the encore where U2 really thrills, and they don’t disappoint this time. Bono’s red laser-lit jacket and illuminated Discs of Tron microphone makes for an unearthly effect during the gorgeous “Ultra Violet (Light My Way).” And the closing song, “Moment of Surrender” is a classic waiting to be acknowledged, and a perfect melancholy note on which to end the show.

I guess what impresses me most about U2 is they still seem to love what they do, after all this time. With apologies to the afore mentioned Mr. Springsteen, U2 has more than thirty years burning down the road, with plenty more places to run and to go.