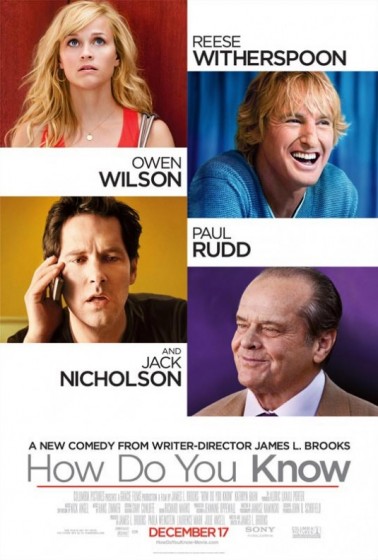 Lisa (Reese Witherspoon, perky and adorable as a shih tzu) is an American softball star—if such a thing can be said to exist. At 31 she’s just a little past her prime, dealing with being cut from her team. She meets Matty (Owen Wilson, who, to continue the canine comparison, is a golden retriever), a big league pitcher terminally self-involved and clueless, but charming enough about all of that to get her to go to bed with him. Before she knows it she’s involved, almost despite herself. Meanwhile, George (Paul Rudd, more of a spaniel, really) is a financial manager in his father’s company who gets set up with Lisa on the same day as he gets into some serious legal trouble and could be found criminally liable for corporate malfeasance.

Is that enough to hang a movie on? The love triangle certainly is. But then, maybe there’s not much suspense when you know pretty quickly with whom she’s going wind up. But the modern romantic comedy generally dispenses with concerns such as suspense and instead offers comfort in predictability instead.

When I saw the trailer for this film, I wondered if maybe this time they’d got it right. I thought back to the example of Billy Wilder’s Sabrina, a romantic comedy that plays in some of the same territory as this one: there’s an element of the corporate environment, there’s the love triangle. But in the film from 1954, you never really know until the end who Audrey Hepburn will end up with. Both Humphrey Bogart and William Holden’s characters are appealing in their own ways. Here, Rudd and Wilson are both charming and funny, but the audience is never really in any doubt what will happen with these three, despite all the plot contrivances that are put in their way.

And that’s a shame, especially when there are great moments between them. Espeically Rudd and Witherspoon… I could have watched just the parts of the movie with them in it and enjoyed it far more. They have some great scenes together; a second date of sorts in his apartment that utilizes some of his improv skills, and later when they go to visit a friend of his who’s just had a baby. They’re both sweet and charming and you can see how they could help each other out with their respective problems. I’ve never been a huge fan of Witherspoons, as I have a hard time not thinking of her as the manipulative busybody Tracy Flick from Election. But she won me over here.

The film is by James L. Brooks, a man with some serious respect in Hollywood, for having helmed  Terms of Endearment, Broadcast News and As Good As It Gets, as well as producing the The Simpsons. His cinematic work tonally tends towards smart, dramatic but also funny, in a way that’s both heartening and true. In other words, quality Hollywood. And going into How Do You Know, I wanted a jolt of that, and I got it, but only fleetingly.

Unfortunately, the movie is over 2 hours long. As Woody Allen has recognized over the years, you don’t need movies to run too long to be good, especially if they’re romantic comedies. The entire first reel here just drags. Far too much time is given to George’s professional predicament and his relationship with his father, played by Jack Nicholson. I’m a big fan of Nicholson’s work, and he does have a couple of good moments here, but I couldn’t help thinking that his whole subplot could have been contracted to one scene and it would have vastly improved and quickened the film’s pacing.

And some of the cliches of American romcoms that, say, Love and Other Drugs refreshingly avoided with the R rating and immodest leads, How Do You Know falls into. Just one example: the “L” shaped bed sheet, one that in a post-coital scene conveniently covers her to the shoulders while he remains naked to the waist. And it’s not that I’m aching to ogle Witherspoon’s bits, I just find the circumstances contrived to the extreme, especially when there are other ways to shoot and edit such a scene that might avoid the need for such odd linen. Just sayin’.