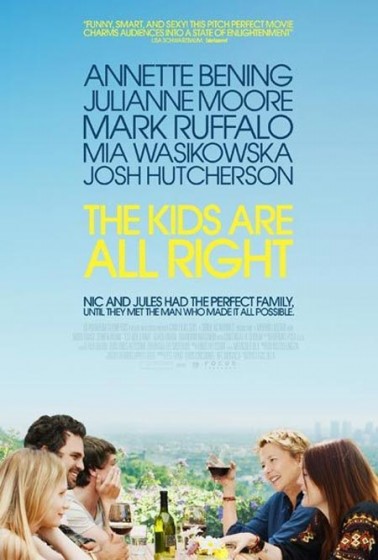 As the year dawdles its way to an end, I’m starting to consider my Best of 2010 list. In order to feel as though myselection has some credibility, I’m keen to catch up on some of the well-reviewed movies I missed in theatres or that just didn’t open in Halifax. So, here come thoughts on films I’ve managed to see recently on DVD. Directed by Lisa Cholodenko
Written by Cholodenko and Stuart Blumberg

Cholodenko is one of those American filmmakers who takes her time developing features (she’s worked in TV, but her features are High Art, Laurel Canyon and Cavedweller, so including this one, that’s four since 1998, with The Kids Are All Right her first effort since 2005) but her authorial voice is always crystal clear. I find her indie aesthetic neither self-conscious or fussy but honest.

Here she tells a small story that probably would be just as moving and effective on a stage. And that’s not a dig, but a recognition of the sterling drama herein. Jules (Julianne Moore) and Nic (Annette Benning) are a same-sex couple who’ve been together for decades, long enough to have an 18-year-old daughter Joni (Mia Wasikowska) and 15-year-old son Laser (Josh Hutcherson), the product of each of the women using a single sperm donor.

Laser is curious about who this guy is, their biological father, so asks his older sister—who now is of age and has the right to seek out such details—to find their father. Turns out he’s a restaurateur and urban organic farmer, Paul (Mark Ruffalo). At first, Jules and Nic are a bit threatened by him, but true to their liberal philosophies they strive to be open minded. When Paul meets them his charm wins over “the kids” and then Jules, who Paul contracts to help him landscape his garden. Then things get really complicated.

All the characters are so well defined, as decisions are made, you can see where they’ll lead, even if the characters themselves don’t since they’re blinded by all kinds of things: love, horniness, fear of failure, fear of getting old, fear of being left alone. They’re all going through their own challenges; Joni has unresolved feelings for her male platonic best friend, Laser is hanging out with an obnoxious dude who is getting him into stupid shit but he doesn’t recognize the bad influence. Nic and Jules have their own struggles inside their marriage, their own emotional inequities. You can feel for all of them, even Benning’s Nic, who might be the most reactionary, least-likable lead character. But you can’t help but sympathize with her. There’s an amazing moment when the camera lingers on her as she has discovered a stinging betrayal and it’s all writ large there in her wonderfully expressive face. Oscar will certainly come calling, and it’ll be interesting to see whether it’s Portman in Black Swan or Benning who wins the day.

A friend who saw The Kids Are All Right back in the summer mused that she liked the film, but wondered why so many of the female characters in the picture were hot for Mark Ruffalo’s cock. Well, I’m a straight man, but I can understand Paul’s appeal. He’s a sensitive, if somewhat self-satisfied, good-looking dude who runs his own business. And he rides a motorcycle, which I’ve heard can be appealing. Why wouldn’t he do well with women?

I guess what I liked most about the picture was the genuineness of the family. Paul is someone who comes in between Nic and Jules but his gender is a non-issue. It’s more what happens with him that’s so problematic to the married couple’s relationship. That’s very cool to see, that non-political stance. Maybe it’s political by being so non-political? I dunno.

I guess I liked the fact that even though it’s set in California, it has none of the trappings a Hollywood film would bring to the same subject, despite the presence of some big name stars. (These days Wasikowska is probably the biggest name in it, given the success of her starring role in Tim Burton’s Alice in Wonderland, which, shockingly, has the second biggest box office of 2010, after Toy Story 3.) And I liked that it’s basically a comedy but is true to the characters so when it switches into drama, you buy it.

In the end it’s a family movie, but neither a liberal, didactic exercise nor a watered-down corporate entertainment. It’s believable. And though some of his choices were questionable, I really felt for Paul. He’s the one who’s really still looking for something and having found it, he could hold onto it.