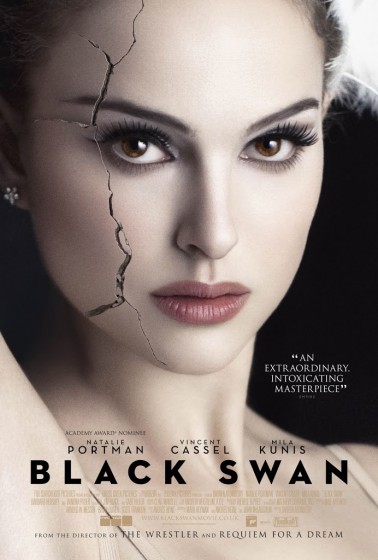 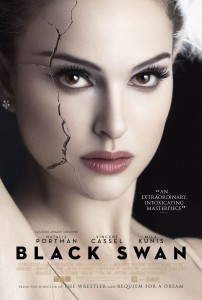 Directed by Darren Aronofsky
Scripted by Mark Heyman, John McLaughlin and Andres Heinz,
from a story by Heinz

Oh melodrama. Such a dirty word these days, except in places like France and Italy, where plays and films pitched at the ragged edges of emotion are considered at least a laudable storytelling expression. Because Hollywood does it so infrequently, or poorly and sometimes unintentionally, it doesn’t get much traction.

From the opening of Black Swan, with its operatic score and stalking camerawork, you can see where Aronofky is going with this. It shares with his film The Wrestler an obsession with the body as the vessel of expression and the price we pay when we use it to past its extremes, but tonally The Wrestler was Fat City while Black Swan is Rosemary’s Baby.

Nina Sayers (Natalie Portman) is a dancer at the New York City Ballet, where despite being a long serving member she’s apparently not made any friends amongst the other ballerinas. Her only pal, it seems, is her controlling stage mother Erica (Barbara Hershey, nicely twisted). She claims to have had boyfriends, but one doubts Erica would have allowed it, or Nina would have taken a break from her singular, disciplined life as a dancer. Nina’s pink-fringed room in the apartment she shares with her mother is a strong indication of her lifelong infantilization, and how her mother’s need to pour her dreams into her daughter and protect her from life’s bumps has hindered her growth. Directly related is how she’s not flowered at the company, and why the director of the new production of Swan Lake, Thomas (Vincent Cassel, all Gaulish attitude and charisma) doubts she’d be right as the Swan Queen. Nina can be the White Swan, no problem, but when she needs to show her dark, uncontrolled and sensual side, she isn’t in touch with it. But a close encounter between Nina and Thomas convinces him otherwise, and she gets the gig. However, Nina is already seeing things, dark shadows of herself, and feels threatened by a new dancer in the company, the friendly, free-spirited Lily (Mila Kunis, convincingly mature).

Black Swan is a study in the sacrifices dancers make in order to excel, and Aronofsky’s effort to explore the duality in the production and in Nina’s character makes for great psycho-sexual drama. Certainly the tension isn’t sprung from whether Nina is losing her rational mind, as we never really believe her hallucinations are reflective of anything but her degrading mental state. This isn’t supernatural. It’s more a question of how far it will take her to embrace the role she’s won, how much she may lose.

The darkness, when it comes, it very creepy, though maybe a touch less gothic than I’d expected. Aronofsky is willing to take us into a few horror-movie realms, but steers clear of complete Cronenberg-esque biohorror or Grand Guignol finale.

The performances are all excellent, with Portman’s expressive face front and centre. Every emotion is writ large as she wilfully offers up her innocence to become this creature, this embodiment of dual personas. We find ourself complicit in her journey in some respects, we want her to get in touch with her darker side and free herself from her mother’s clutches. (Well, at least, I did.) And nice to see Winona Ryder in a small but key role as the former star ballerina, now alcoholic and embittered.

Though I understand Portman had some previous dance experience, Kunis did not, yet both convinced in this layperson’s eyes. Both trained in advance of shooting and dropped a lot of weight to achieve those zero body-fat dancers physiques. Portman’s shoulders, both muscular and bony, say as much about who Nina is as anything she says or does, especially when she scratches at them compulsively.

So, yeah, it’s melodrama, but slathered on the screen with satisfying richness. And as with The Wrestler, a certain amount of familiarity in structure, there the final dignity of a man finding peace with who he is, and here the obsessive performer realizing the unnatural summation of an obsession, both are stories we’ve seen before, but seldom as well done as these.