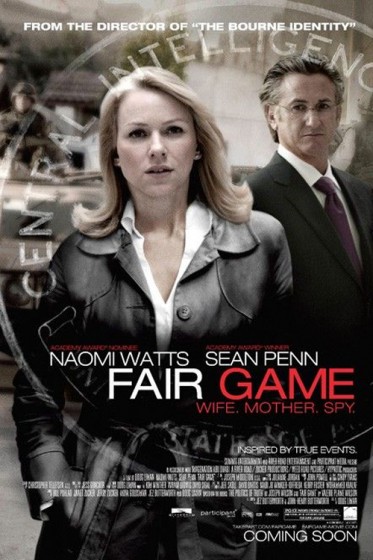 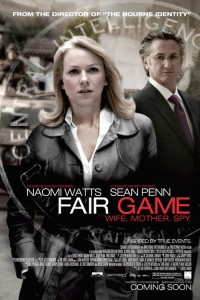 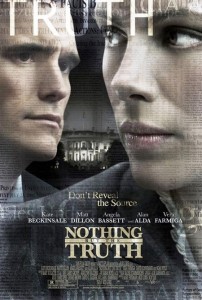 Nothing But The Truth
Written and Directed by Rod Lurie

I caught up with Fair Game this evening and saw Nothing But The Truth some months ago, predating this blog, so as one is fresh in my mind and one’s a little foggy, it might be unfair to compare them. But I’m going to as both are inspired by the same real-life events.

Fair Game adapts two non-fiction books combined to form a single screenplay, one by outed CIA agent Valerie Plame and another by her husband Joseph Wilson. Those of you who pay attention to such things will remember when Plame was in the news in 2003. Washington Post reporter Robert Novak revealed in his column that Plame, the wife of Ambassador Joseph Wilson—a vocal critic of the Bush administration’s reasons for going to war in Iraq—was a spy for the CIA. This pretty much ended her career as a spook. It turned out that Lewis “Scooter” Libby—and what adult man goes by the name Scooter in this day and age, it’s just weird—the Vice President’s Chief of Staff, had sold her out to the press in retaliation for Wilson’s comments about the administration’s warmongering. It also turns out that revealing the identity of a CIA agent is a criminal offense. This serves as a the crux of the drama in Fair Game, and how these events put a lot of stress on Plame and Wilson’s marriage.

Meanwhile, over at the New York Times, reporter Judith Miller had evidence about this leak of information, but in 2005 she invoked her journalistic privilege to not reveal her source and was jailed for three months for contempt of court. This story inspired Nothing But The Truth, however mightily fictionalized, to the point where it hardly relates to the facts at all.

In some ways, the fictional piece is a bit more satisfying for a sweet dramatic twist in the ending, but both movies are really serving up the same lesson: we need to have a sense of responsibility in civil society and know when to stand up and fight for our principles.

Let’s start with Nothing But The Truth. Writer-director Rod Lurie—whose had some success with American political drama in The Contender and the TV series Commander in Chief—tells the tale of a dogged young reporter, Rachel Armstrong (Kate Beckinsale) who writes a piece that claims the administration ignored a report by a CIA operative (Vera Farmiga) regarding bombing in Venezuela. The piece names the CIA agent so Armstrong is subpoenaed to reveal who her source. When she won’t, she’s jailed, and for a lot longer than three months, while things get rough for the agent, too. It takes a toll on Armstrong’s marriage to Ray (but then did you believe David Schwimmer was going to be steadfast and supportive?) and on her life, of course. A famed litigator, Alan Burnside (Alan Alda, having a blast with the role) goes toe-to-toe with prosecutor Patton Dubois (Matt Dillon, excellent) for Armstrong’s future.

There is something a little, well, network TV about all of it. Just as Commander in Chief suffered in the shadow of Aaron Sorkin’s West Wing, so I think Nothing But The Truth suffers a little in comparison to grittier political thrillers from folks such as Oliver Stone. But I gotta say, I did appreciate how the movie really elucidated the burden of the journalist who takes her job very seriously, and did it as well as State of Play did last year. As a member of the media myself, it’s nice to be considered the good guys in these entertainments, and hopefully it reminds people the positive role the press can play in people’s lives, part of a system of checks and balances of the people in power.

Fair Game sticks much closer to the facts. Plame (Naomi Watts at her most steely jawed) is all over the world with her work, protecting American interests, including doing her best to figure out if Iraq has weapons of mass destruction. She also happens to be a mother to twins and married to a very outspoken man, Wilson (Sean Penn, convincingly grumpy) who disagrees with the way the administration is misusing his research in Africa, which indicated Niger had not sold uranium to Iraq.

The finer points of the plot are explained above. As Plame is basically disowned by “the company” and hung out to dry by both the right wing press and the White House, it becomes about whether her instinct to keep her mouth shut or take the approach of her husband, who goes on TV and speaks his mind at every turn, even though it jeopardizes his career and the security of his family. That’s an interesting struggle, and there’s plenty of drama squeezed from how it plays out.

Director Doug Limon, who gave us the excellent Go and The Bourne Identity, as well as the execrable Mr and Mrs Smith, at least knows how to keep things suspenseful, and does a bang-up job here. In the halls of power, airport lounges and the streets of Amman, the pacing never flags.

I wasn’t impressed by Limon serving as his own DOP, as the roaming camera and hand-held work served to distract much more often than it provided any feeling of verité. Also, though I know they’ve worked together before, I didn’t entirely buy Watts and Penn as this loving Washington power couple. In dinner-party scenes I understood their shared secrets, but the two alone together, sometimes I didn’t buy their intimacy. She’s so tough and he so crusty, it isn’t easy to understand how their relationship works.

But overall, I got the message that is being told: it’s the principle of the thing. Unlike Nothing But The Truth, the press isn’t necessarily your friend in Fair Game, but like the previous movie, in the end, we all have to remember what it means to be citizens in a free society. I can get behind that.