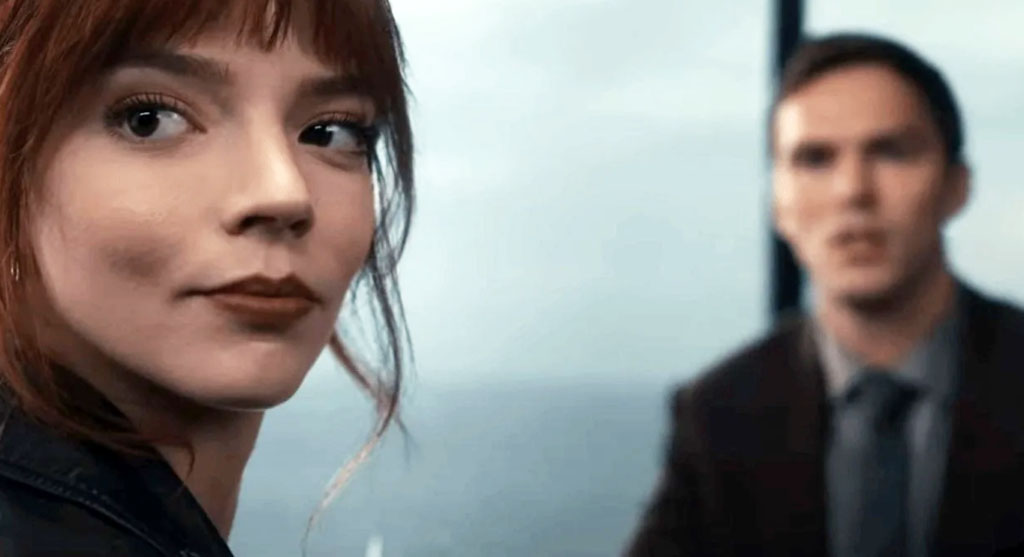 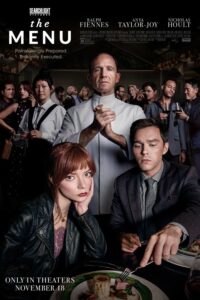 Having gone to a food analogy for the headline, I’ll try to exercise a little restraint for the rest of this review. The Menu is a new comedy thriller about a group of diners who pay for an exclusive meal at a high-end, island-based Noma-esque restaurant, called Hawthorne, but get a whole lot more with their meal than haute cuisine.

Keen foodie Tyler (Nicholas Hoult) is in the company of Margot (Anya Taylor-Joy), who it turns out he’s treating — cost is no obstacle for him, or any of the others — and she’s a last minute replacement for his expected date. 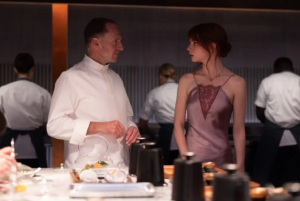 Also coming over for dinner is a trio of sleazy finance bros (Arturo Castro, Rob Yang, and Mark St. Cyr) a fading, asshole movie star (John Leguizamo) and his flailing assistant (Aimee Carrero), an older, unhappy couple (Reed Birney and Judith Light), and a scathing food critic and her pal (Janet McTeer and Paul Adelstein). They’re all greeted by an officious guide (Hong Chau, terrific here and in the forthcoming The Whale) who shows the customers around the island and seats them for the meal.

What follows feels like a play on some weird food delicacy show on a streaming service where we get to watch a small group of posh twats try peculiar dishes prepared by a hyper-loyal kitchen staff subservient to a domineering celeb chef — Ralph Fiennes, here embodying a familiar and precise intensity as Chef Slowik. 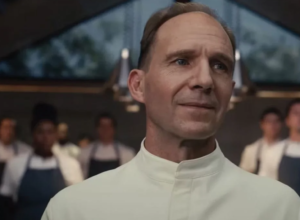 I won’t say much more than that about the plot — the pleasure is going where it takes you, through the courses (all described in text onscreen, of course) and the revelations of what Slowik actually has in mind for the evening.

It’s fair to describe this as a satire, but unfortunately it’s not terribly funny. If you want to see The Menu except where the filmmaker takes a sledgehammer to very similar targets, check out Triangle Of Sadness, which is still showing at the very same multiplex where I went to see The Menu this evening. The middle act of Ruben Östlund’s demolition of the one percent has more laughs — and gross-out moments — than the entire running time of this film. 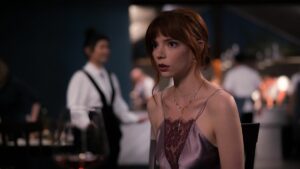 Director Mark Mylod, best known for his work on prestige TV like Game of Thrones and Succession, shoots with confidence and enough pizzazz to hide the single-location concept that betrays what was certainly a mid-pandemic project. Granted, this is probably one of the cleverer ones I’ve seen.

But while The Menu does does a decent job dissecting fanboy culture and the pretension that comes with so-called class, all of its characters are underwritten. Even just a soupçon of backstory on how Chef Slowik inspired his kitchen cult would’ve helped us swallow the plot twists that veer into lazy horror — a trope typical to that particular genre where filmmakers seem to think that so long as it’s creepy or gross enough, we’ll eat anything they serve up. 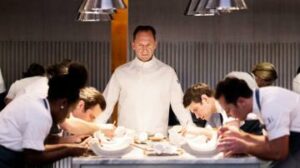 (I guess I haven’t quite succeeded in avoiding the foodie language.)

Let me end by saying The Menu is otherwise fine, but is certainly lifted by the excellent work Anya Taylor-Joy is doing these days. Once again she’s in a movie where she’s the most magnetic person on screen. When she shares the frame with Fiennes, they sizzle. 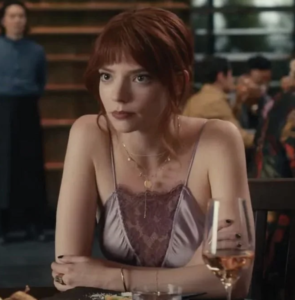