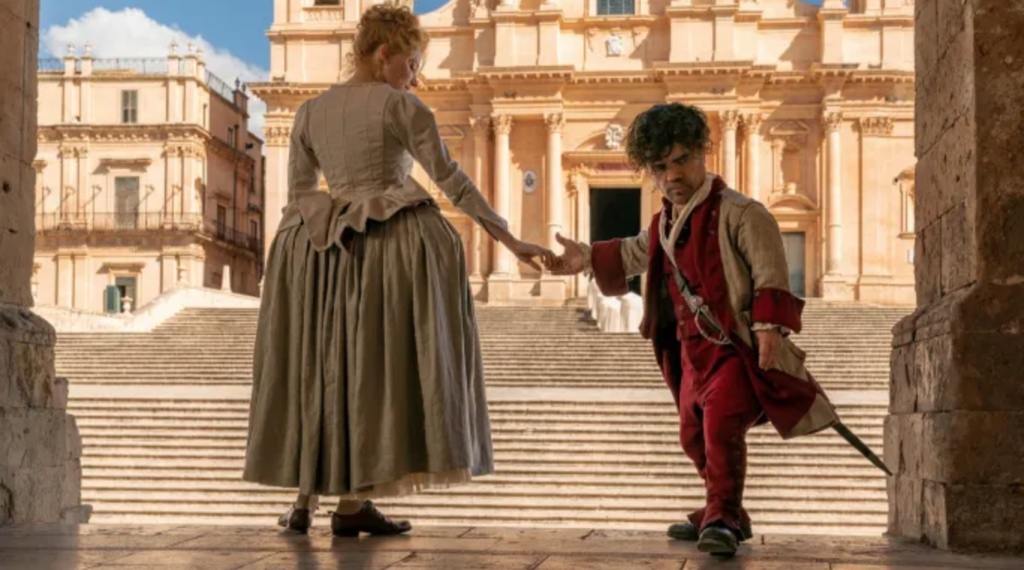 Directed by Joe Wright | Written by Erica Schmidt, based on the play by Edmond Rostand | 123 min | ▲▲▲▲△ 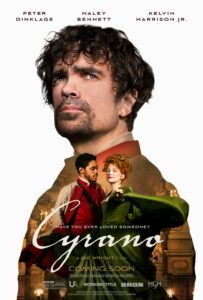 My first introduction to Cyrano de Bergerac was in English by Steve Martin in the delightful Roxanne, and then in French just a few years later by Gérard Depardieu.

Based on a play, it’s the story of a 17th Century poet and soldier who is blessed with the gift of wit and wordplay but cursed with an enormous schnoz. He’s in love with his best friend, the beautiful Roxanne, but is too insecure about his shortcomings to declare his feelings. Meanwhile, she’s fallen in love with a young, handsome man, Christian, who doesn’t have the same gift with words as Cyrano. She asks Cyrano to help bring them together, and he does, but it’s Cyrano’s words that fill the letters to Roxanne from Christian.

Those earlier, jaunty films accentuated the romantic comedy in the story, but it’s really about having the courage to be true to yourself and to those who you love, damn the torpedoes.

In this version, a musical, Kelvin Harrison Jr is Christian, Haley Bennett is Roxanne, and the great Peter Dinklage is Cyrano. Shot mostly in sunny Sicily, it’s a lovely, if somewhat uneven, version of the classic tale.

There’s some other business with a nasty Colonel (Ben Mendelsohn), who also wants Roxanne and hates Cyrano, and a lovely supporting turn from Bashir Salahuddin as Cyrano’s confidante, but at its heart are the three people in love. Though Cyrano starts with a lot of joy, on the whole it’s played much more heavily, much more seriously than those other takes I mentioned. Much of that works, some doesn’t. 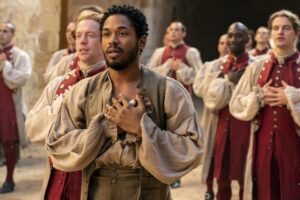 What’s a little rocky here are some of the actors’ singing voices, carrying tunes beyond their comfort levels.  The film also had trouble with some of the dialogue, which occasionally ends up sounding too flowery and saccharine for where this story ends up going — especially set against the particular tone of the songs. 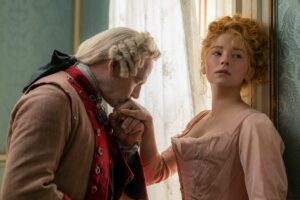 What raises this particular Cyrano from a three triangle to a four triangle movie are two sterling elements of the ensemble.

One is the music, from Aaron and Bryce Dessner of The National, who bring the band’s distinct sense of melancholy and matter-of-fact sad-bastard energy to bear. It’s in sharp contrast with the sunny setting, but as the film embraces the tragedy of the original text the deep, yearning sadness of a song like “Wherever I Fall”, sung in a lovely scene by Glen Hansard, Sam Amidon, and Scott Folan, elevates the material to a place where it’s genuinely moving. 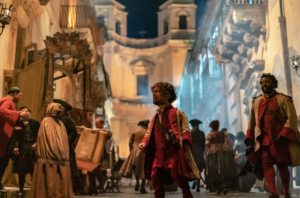 The second element is Dinklage himself. This is a terrific role for him completely absent the problematic proboscis, which is unnecessary.  Dinklage finds the part in collaboration with his wife — writer and theatre artist Schmidt — and he delivers in the title role a distinct, deep pain and regret. This might be his best work, though it does reflect some of what he shared in The Station Agent, his breakthrough role.

He also, somehow, makes his deep insecurity and pride seem almost poetic, even noble, because he makes his decisions based on what he thinks will make Roxanne happy, convinced that could never be him. 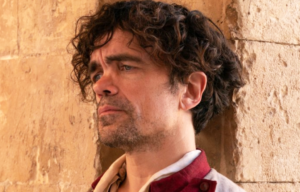 Oh, and as for the singing, Dinklage doesn’t have any trouble with any of it — his gravelly murmur is a solid substitute for The National’s Matt Berninger.