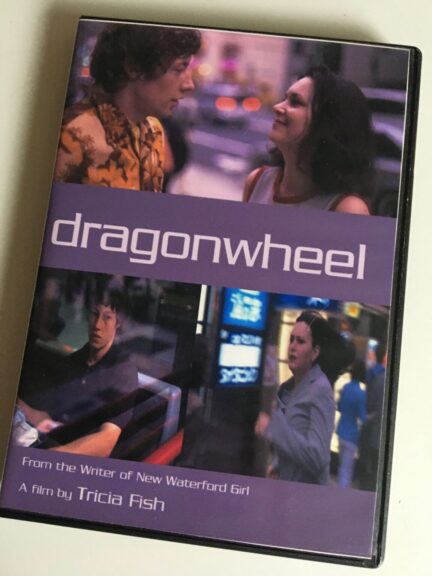 Welcome back to a semi-regular feature on FITI called ” A Cult of One,” where I highlight an older film that I think is worth discovering.

Written and Directed by Tricia Fish | 94 min | On DVD 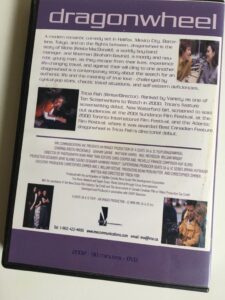 An opportunity to interview writer-director Tricia Fish — of New Waterford Girl fame — led me to her little-seen and practically unavailable directorial debut.

Shot on video, it was part of a group of films made in 2002 where filmmakers were given a shoestring budget and carte blanche to do what they liked. (Thom Fitzgerald’s The Wild Dogs was amongst them and I think Daniel MacIvor’s Past Perfect.)

Watching Dragonwheel you figure two-thirds of that budget went into travel for the cast and crew — it shot in Halifax, Mexico City, Barcelona, and Tokyo.

And while the picture is unpolished — and shooting on video won’t make anyone’s movie look good — Fish’s skills as a comedy writer and storyteller bubble up in surprising, entirely charming ways. As an unpredictable romantic comedy — practically an oxymoron — you can’t help but think that with a halfway decent production budget this really could’ve worked for audiences anywhere.

The set-up is unusual: Sherman (Graham Gavine — this is his one IMDB credit, which is a surprise since he’s got the right look for the movies, and is a total doppelgänger for a young James Coburn) is grieving the death on the highway of his brother and promptly gets engaged to his brother’s somewhat less distraught girlfriend (Stacy Smith), who he’s not really interested in. This becomes clear at an awkward engagement party.

Sherman needs to get away to clear his head, so when an around-the-world-ticket to follow a hyper-popular tween pop band on their global tour lands in his lap he takes it — even though it should be going to the band’s number one fan.

Enter the band’s handler and “pedophile filter,” Gloria (Krista MacDonald), who Sherman sits next to on the flight to Mexico City — the jig is up for Sherman. But, guess what, despite Gloria’s misgivings and Sherman messing up her plans for the band, she’s attracted to this interloper and their weird romance is off like a shot.

This is complicated by Gloria’s ongoing affair with a designer who works for the boy band, played by  a completely uncredited Andrew McCarthy, though it’s great seeing him provide a little Hollywood star power to the proceedings. He’s joined by a host of  familiar faces from New Waterford Girl and any number of Nova Scotian-shot films. High points include Rejean Cournoyer as the embittered flight attendant on the plane to Mexico City and whoever provides the voice of the chronically uncertain pilot.

I’ll reiterate, one of the picture’s central pleasures is how unpredictable it is — I had no idea where it was going. When you watch as many movies as I do that’s a delightful feeling. It doesn’t all work, but what does makes it entirely worthwhile.

I don’t tend to review features that people can’t see, and I’m sorry to say Dragonwheel is going to be very hard to find. Keep your eyes out for this one, and maybe it’ll resurface. Weirder things have happened.