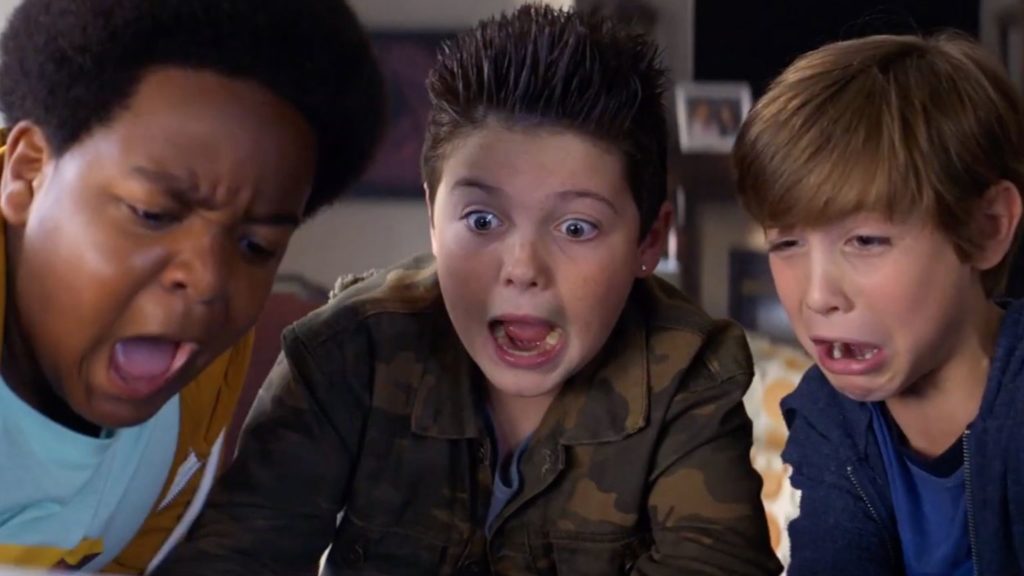 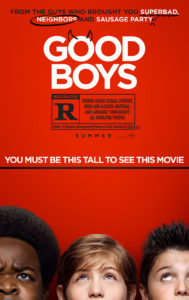 I was willing to give Good Boys the benefit of the doubt at least partly due to the inclusion of Will Forte and Molly Gordon in the cast, and DJ Shadow and Run The Jewels on the soundtrack, all who were also featured in one of the best movies of the year, Booksmart. But this picture has a fraction of that one’s sophistication—this is sitcom-level depth for most of its running time, squeezing laughs out of 12-year-olds saying “fuck.” If that’s your bag, fill your boots, but until the last 20-or-so minutes, this is obvious, uninspired stuff. 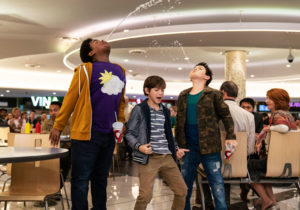 That’s not the fault of the kids, who make what is good here worth watching: Max (Jacob Tremblay), Lucas (Keith L. Williams), and Thor (Brady Noon), are uncool suburban tweens who call themselves the Beanbag Boys (because they like to hang in beanbags, natch’). Their mission is to go to a party with the cool kids, a kissing party, a mission endorsed especially by Max, who has a crush on one of his classmates. The problem is these kids, who grew up with the internet, have no clue how to use it to figure out how to kiss a girl. That’s only one plot convenience. They end up in deep shit because they use a drone that Max’s father (Forte) forbade him to use to spy on two older girls (Gordon and Midori Francis), one of whom they suspect might be experts in smooching. When the drone crashes, the “good boys'” day goes from bad to worse, and prompts them to skip school Ferris Bueller-style to fix things. 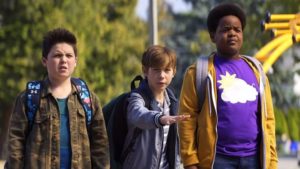 This is all pretty thin gruel. There’s a few brief laughs to be had when these guys discuss tampons or sex toys when they haven’t a clue what they are for—they’re the kind of gags that might’ve made for a chuckle in Stand By Me or Superbad before we get to humour generated by a more realistic or engaging scenario. The low point is a scene where the three friends have to run across a 12-lane freeway to get to a mall, for reasons at that point you’d be forgiven for having forgotten. Good Boys doesn’t do much to root the laughs in genuine experience. 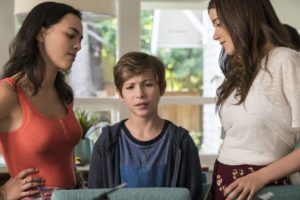 At least until the third act. There’s a scene at a frat house where Max takes out a bunch of bros with a paint-ball gun, that’s pretty funny, and that’s followed by a blow-up that splits the three friends, forcing them to reassess their relationship. As drama it doesn’t really wash, but it triggers a series of scenes that reveal things about the boys that gets closer to substance, and it’s sold by the performances. 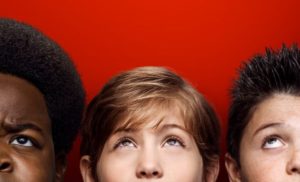 The film trades on a heartwarming theme of embracing who you are rather than what the popular kids expect of you, and that’s got a lot of worth for young people, even though audiences the age of the kids in this movie probably shouldn’t go anywhere near it given all the adult humour. You do end up caring about the Beanbag Boys by the end, but it’s too bad the movie’s operational mentality is so relentlessly, tiresomely juvenile.