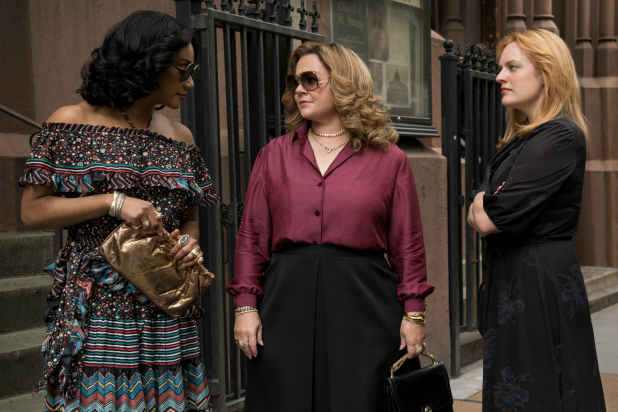 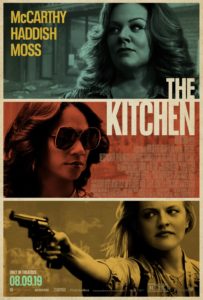 Berloff loves her some Scorcese, and there’s nothing wrong with that. The screenwriter-turned-director loads up her first feature with so many Marty-familiar-notes, from the gritty, 1970s crime drama scenario to the wall-to-wall classic rock, prominently Fleetwood Mac’s “The Chain,” “Gold Dust Woman,” and Heart’s “Barracuda.” But, what Berloff serves up in The Kitchen is a far broader, trashier version of a gangster joint than Scorcese ever dreamed up. It still manages to entertain, largely due to the talent and commitment of its three leads. 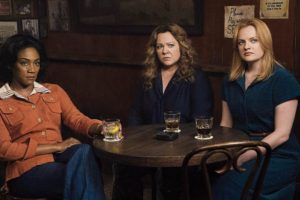 And let’s face it: Melissa McCarthy, Elisabeth Moss, and Tiffany Haddish could be acting with garbage bags over their heads and their movie would still be worth sitting through. In this case they’re draped in the fetching gangster couture of late-’70s New York City as Kathy, Clare, and Ruby, all married to numbskulls who all get pinched during a liquor store robbery. The dudes get three years, leaving the ladies to fend for themselves. The Irish Mob spousal support system doesn’t do much to help make ends meet, so the trio moves in on the mob’s territory. Using sweet persuasion as a more effective tool than head-bashing, they end up making some dough and learning what it takes to rule Hell’s Kitchen. 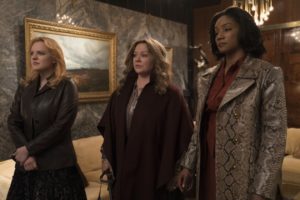 This might be the toughest part of the picture to swallow, that somehow they’re able to scoop up their husbands’ crime empire with a minimum of fuss, though they quickly prove that the menfolk in the Irish community struggle to distinguish their elbows from their assholes. Kathy’s husband, played by Brian D’Arcy James, is the only partly decent one. Clare’s guy (Jeremy Bobb) abuses her, and Ruby’s (James Badge Dale) isn’t much better. Overseeing business is Margo Martindale’s matriarch, but it’s unclear just how hands on she is. Then, out of the blue, Domhnall Gleeson drops in as a Vietnam vet who has no problem doing a little killing for the ladies’ cause and showing Clare how to carve up a body, all while the feds (Common and EJ Bonilla) watch from their car across the street and wait. And wait. And wait. 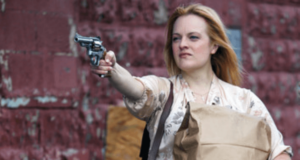 The plot crumbles faster than hot pie crust, and in places the script is so cliched it skips into comedy, while efforts to inject any contemporary political import don’t really work. And, in case you’re wondering, it’s not anywhere as good as last year’s superficially similar Widows, but seeing these particular performers strut through this material and embracing the genre tropes provides enough entertainment value to forgive a lot of the clunky storytelling.The Kitchen won’t be winning any prizes come awards season, but in a grim summer of subpar mainstream movies, I’ll watch Elisabeth Moss shoot a guy in rage any night of the week over another calculated “live action” remake of a perfectly fine Disney movie.