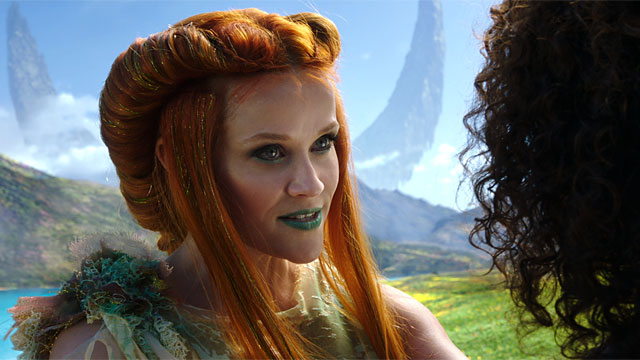 Directed by Ava DuVernay | Written by Jennifer Lee and Jeff Stockwell, based on the novel by Madeleine L’Engle | 109 min 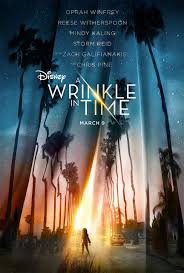 It’s been a long time since I watched a movie that could be described as so Disney-esque, and unfortunately I mean that as a pejorative. A Wrinkle In Time is sparkly and frothy and layered in primary colours and made especially for children. They may enjoy it, though adults may have their teeth rot out of their heads from the sweetness.

I’m not one who has read the book it’s based on, published in 1962, but you can feel the story stretch and fail to accommodate some kind of internal logic. Meg Murry (Storm Reid) is a tween who acts out at school, miserable for years since the disappearance of her big-brains-on-toast father, Mr Murry (Chris Pine), who dreamt of travelling across space and time and maybe succeeded, though no one is clever enough to figure out how. Mom (Gugu Mbatha-Raw), seems to be doing fine, mind you. Meg’s got a little brother (Deric McCabe), who everyone insists on calling by two names, Charles Wallace. He’s some kind of boy genius, and an extrovert to boot. 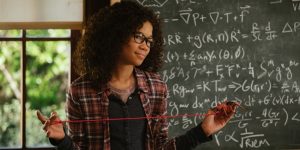 The opening act feels like a cinematic gum drop, sweet and dreamy, with swirling cameras and absolutely no stakes to speak of, with every scene dissolving into the next. Though the film was clearly was made with children in mind, none of the kids in the movie speak like the screenwriters have ever met one.

One day on the way home from school classmate Calvin (Levi Miller) feels compelled to join Meg and Charles Wallace—an inclination that’s never explained, nor why he’s even needed on this adventure—and away they all go on an inter-dimensional journey, courtesy of Mrs Whatsit (Reese Witherspoon), Mrs Who (Mindy Kaling), and Mrs Which (Oprah Winfrey), a triumverate of magical fairy godmothers. But who are they, really, and where do they come from? Not much is explained, and we’re expected to carry a lot on faith here. Speaking of faith, this whole thing has the air of Christian allegory.

The middle of the film features sentient flowers and Mrs Whatsit turning into flying romaine lettuce, and all there is to fear is CGI smog on the horizon. Most irritating is Mindy Kaling’s character’s insistence on poetry-spouting. She could’ve been entirely cut out of the film without any sense of loss. 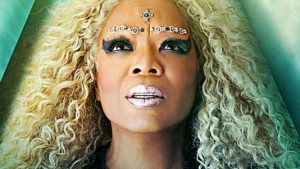 It isn’t until the three ladies go away and the children are left to fend for themselves do things begin to get interesting. For a few minutes we land in a Lynchian suburbia, followed by creepy Michael Peña on an overcrowded beach, and finally ending up in the face-to-face with the real darkness when it hides inside one of them.

Don’t worry, nothing too terrible will happen here, just a strangely ephemeral and disconnected blockbuster and Disney’s continued obsession with stories of children abandoned by their parents. Parents may feel like abandoning their children at the cinema for this one.