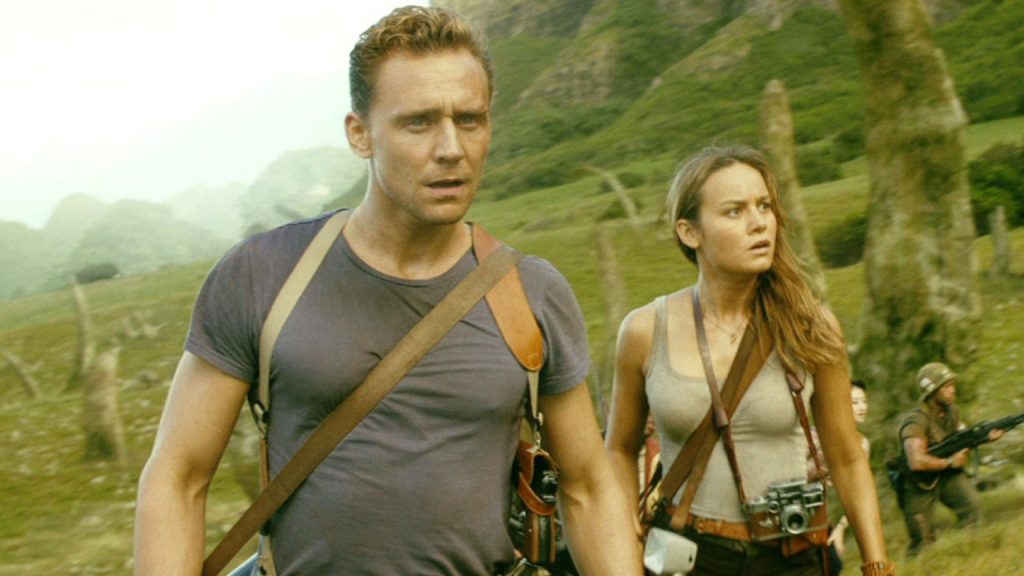 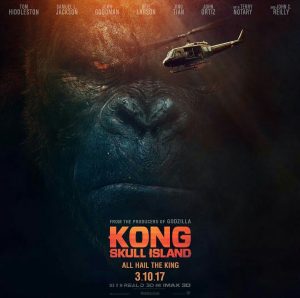 Kong: Skull Island is as much a movie about movies as it is a movie about a big ape. It’s a deeply self-reflexive summer blockbuster weirdly released in March. But, that’s fine: It embraces what it is, crams as much fun as it can into its running time, and if it rings hollow now and again the echo is hard to hear in the din of giant monsters in pitched battle.

It also puts paid to the idea that Tom Hiddleston is good in everything.  He’s James Conrad, the hunky jungle tracker, and if this movie was made 45 years ago (when it’s set) he’d have been played by Roger Moore, chomping on a cigar and quick with a sexist crack. Hiddleston is just too refined for this material. It’s a role Gerard Butler would have shone in, bringing some much needed smarm. If there’s supposed to be any romantic heat between the leads — Brie Larson’s photographer Mason Weaver being the other side of that dynamic — someone forgot to strike the match.

Fortunately, there are other positive distractions. This new Kong starts with scientists John Goodman and  Corey Hawkins searching for evidence of giant monsters they believe exist in hidden corners of the world. In order to explore a mysterious, storm-shrouded island in the South Pacific they need funding from a US Senator (Richard Jenkins) and the help of a military escort — one of those cavalry-turned-helicopter crews we saw in Apocalypse Now. It’s led by Sam Jackson, playing a soldier who doesn’t feel like he’s got any purpose unless he’s got a war to fight.

Larson, as the only woman in the film with a line of dialogue, is OK — she’s got some of that Hiddleston prestige stink on her, too, but she fares better than him by having just a little bit of fun — and stalwart character actors Toby Kebbell and John Ortiz distinguish themselves.

Were there any justice at all, the great John C. Reilly would be remembered come next year’s Oscar time for his supporting role here: He’s hilarious, far away the most engaging character on screen. (That’s never going to happen, but a guy can dream.) 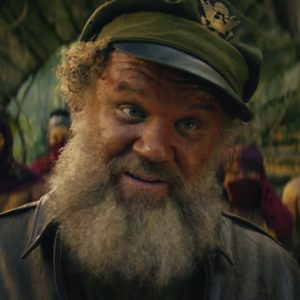 I mentioned the movie-movie references, and there are plenty, from the previous Kong movies, especially 1933 and 1976, as well as lots of war movies, including the previously mentioned Coppola classic and Hell In The Pacific. It’s all done with gusto — swirling cameras, high-end digital and real life production design, an enthusiastic score, and the inescapable oeuvre of Credence Clearwater Revival, because we all need to hear “Run Through The Jungle” one more time, right? The movie could use a little more authentic-to-the-period grit — only one character smokes, and when he does he gets chastised for it. Highly unlikely in 1973. 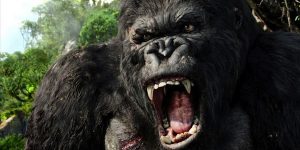 The monsters are all CGI — some good, some pretty mediocre. Our titular critter gets the expected character arc: a terrifying presence at first, then an object of pity, before finally becoming a sympathetic figure. There are far fewer of the Beauty And The Beast moments than in earlier versions of the story, but maybe that’s for the best. 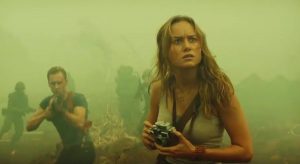 Overall, there’s plenty to recommend with this new Kong, it’s big, brash, and loud. And if the post-credit scene and threat of franchise — connecting with another prominent giant monster property — is as obvious as it is inevitable, it doesn’t spoil a largely good time.