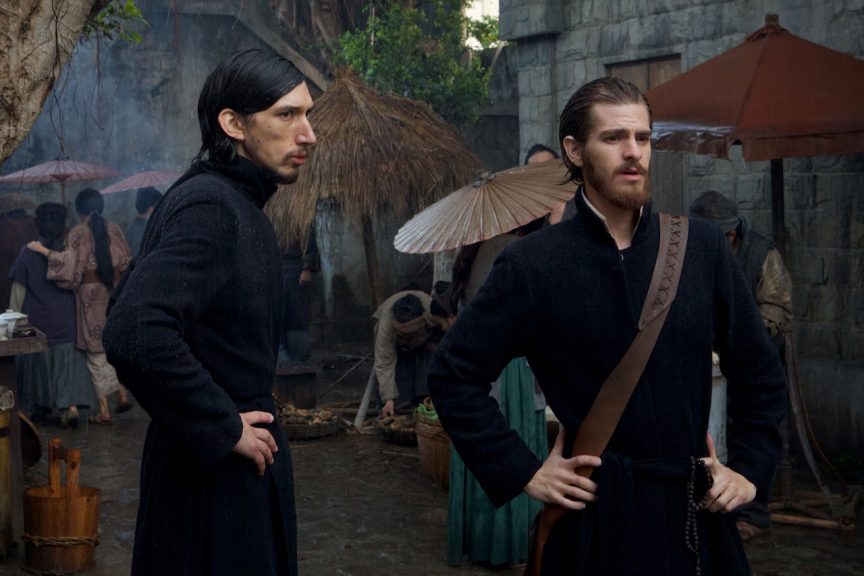 Martin Scorcese has made a lot of different kinds of movies, but much of his work can be grouped in three modes: The street fighter, telling tales of desperate, frequently armed men in Taxi Driver, Goodfellas, Gangs of New York, The Departed, and The Wolf Of Wall Street. The sophisticate, bringing to the screen prestige dramas and biographies such as Raging Bull, The Aviator, The Age of Innocence, and Hugo.

Then we have his small collection of faith-based epics—The Last Temptation of Christ, Kundun, and now, Silence. They each ask, at what cost our belief? At what cost do we hold true to the word of god? In Silence, the answer to that question is the most uncertain of the three.

Father Sebastião Rodrigues (Andrew Garfield, solid) and Father Francisco Garupe (Adam Driver, gaunt) are17th Century  Portuguese Jesuit priests. They’ve received a letter that suggests their mentor, Father Cristóvão Ferreira (Liam Neeson) has been tortured in Japan and committed apostasy. The Japanese shogunate has banned the Christian religion in the country, forcing the faithful to practice in secret. Rodrigues and Garupe sail to Japan, meeting with believers in remote villages while searching for clues to the whereabouts of the their fellow priest, refusing to accept he would have shirked his faith. There’s no way around it: at more than two-and-a-half hours, Silence is, in parts, a slog. Especially in the first act where, despite some gorgeous cinematography and vivid work from the two leads, it’s really slow to get going. Scorcese and his trusty editor, Thelma Schoonmaker, could have easily cut a half hour in the opening 60 minutes without any huge impact on the overall plot.

The second half of the film becomes a prison camp picture, where Rodrigues’ conviction is truly tested in horrific circumstances, including the repeated betrayal from his own, personal Judas, Kichijiro (Yôsuke Kubozuka). It’s here the film’s structural forbearers are made more distinct: Vietnam epics Apocalypse Now and The Deer Hunter. I don’t think Silence is nearly as good as either, but I can’t fault Scorcese’s effort to explore similar issues of life, death, and faith—it’s a thoughtful film that works hard to frame its themes.

The Japanese people who hold onto their Christian faith are tortured and murdered because of it. What joy does it possibly bring to their lives? How is God being of any service to them? The silence of the title is the absence of the Christian God when His most faithful need His mercy—a scene where three men are crucified and drown in the pounding surf is perhaps the film’s most powerful. Rodrigues struggles profoundly with this, and for long tracts Silence feels like an explicit indictment of the church’s colonial mandate. Even at its end it could still be that, but not an indictment of one man’s belief. One other thing I wanted to mention, and that’s Hollywood’s tired convention of accents. In this film, the English-speaking priests must affect Portuguese accents because that’s where they supposedly are from—even Ciarán Hinds as their superior, Father Valignano. But as Ferreira, Neeson speaks in a slightly mid-Atlantic version of his own Northern-Irish brogue. It’s inconsistent and silly. If we suspend our disbelief that these guys are all speaking Portuguese, let’s suspend this fake accent convention, too.