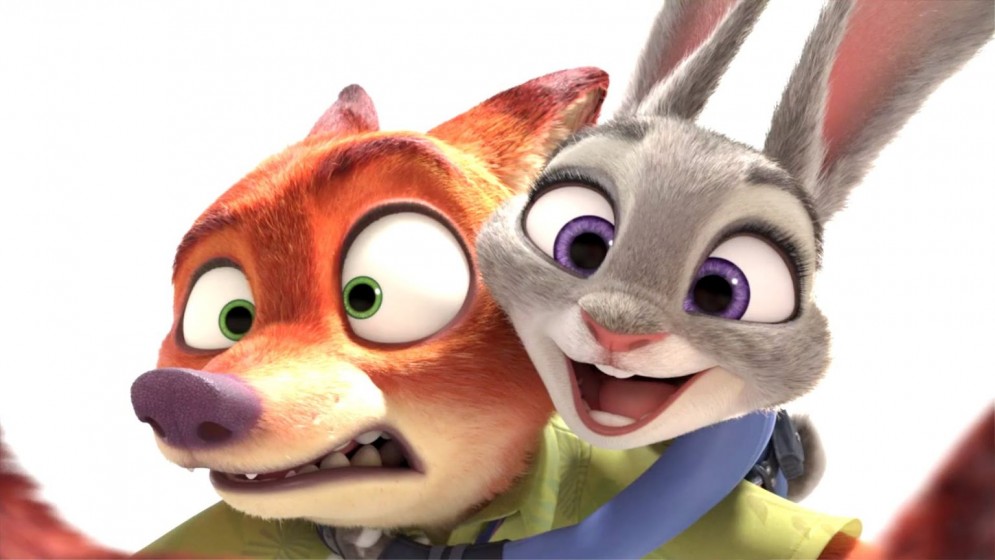 Directed by Byron Howard, Rich Moore and Jared Bush | Written by Howard, Moore, and Bush, with others | 108 min | ▲▲▲△△ 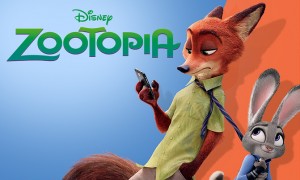 Disney does good work in animation, especially since Pixar’s John Lasseter went over there to run things. He serves as Executive Producer here on a film with three directors and too many writers for me to list. I sense the Toy Story director’s guiding hand and quality control.

This many-authored script is definitely clever. It imagines a world where the multiple-climate capital city—Zootopia, ‘natch, though I gather it’s called Zootropolis in Europe, where there were copyright conflicts—is a wondrous and peaceful union of mammals.

Here the rule of law and social evolution mean that predators and prey live in peace and harmony. Into this city comes Judy Hopps (Ginnifer Goodwin), a bunny from the sticks who wants to be a big city law enforcer. She somehow graduates at the top of her class through sheer will and a handy training montage, but is given parking patrol duties by her unimpressed water buffalo boss (Idris Elba). It isn’t long before Judy has teamed up with a hustling fox, Nick (Jason Bateman), to investigate the mysterious disappearance of predatory mammals from across the city.

The conceit is terrific: it allows the story to swivel on how certain species stereotype others and where even in Zootopia, fear and bigotry can rear their ugly heads. Those lessons are served up with style. The film also manages to have some fun with cinematic stereotypes, where a mole gangster (“Mr Big”) is a dead ringer for frequent gangster actor Joe Viterelli. And the mystery plot keeps the story moving, offering a couple of nifty thriller reversals.

But the fantasy society doesn’t do much to explain what everyone eats, aside from popsicles and ice cream. Have all the carnivores become vegetarians?  And how, exactly, does this place manage to be a rainforest, savannah, and icy tundra?  This might seem nit-picky, but I was looking for a little internal logic (or maybe some fictional science) in the analogous worldview.

And then there’s the continued ubiquity of a certain theme in American children’s programming: You are exceptional and you can be anything you want to be just by wishing for it hard enough. Luke Epplin in the Atlantic referred to it as “The Cult of Self-Esteem.” 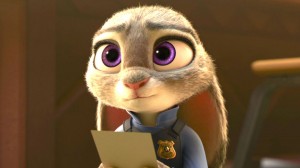 I get the power of positive aspirations, but sorry kids, not every-bunny is going to be the astronaut, the rock star, or even the police officer, and selling this message over and over is no good for any-bunny.

Frankly, as much fun as Zootopia is, it would be nice to see a movie for kids where we weren’t being force-fed the lessons in narcissism along with the laughs.