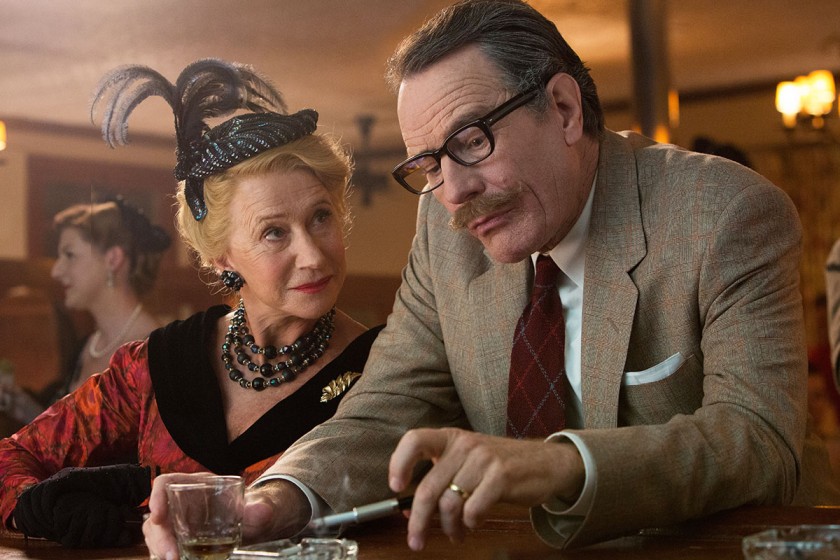 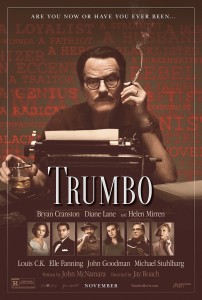 One thing you can count on: Hollywood’s interest in itself never flags.

In this case, the interest is reasonably warranted: 25 years in the life of Dalton Trumbo, an esteemed screenwriter who had the poor fortune of being a principled, political animal, a Communist in post-war America when Communism was a nasty word. Investigated by the House Un-American Activities Committee and sent to prison, Trumbo was blacklisted upon his return from the slammer and had to write b-movies under a pseudonym to keep his family fed while his writer buddies either did the same or named names.

Roach, known for broad comedies like Meet The Parents and Austin Powers, has next to no visual style, and starts his movie with a bunch of stiff scenes. As with too many biopics, you’re left wishing this was a documentary on the same subject. Worse, it feels heavy handed—he means to teach us something important, damn it. 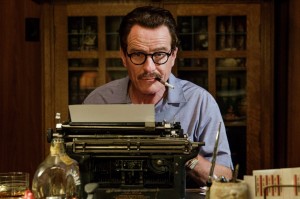 As the eponymous lead, Bryan Cranston is blustery and mannered. You can’t take your eyes off him, even though at times he seems to be impersonating rather than inhabiting.

Other performers fare better as we go along—Michael Stuhlbarg as a too handsome Edward G. Robinson, David James Elliot as John Wayne, Helen Mirren as Hedda Hopper, Louis CK as Arlen Hird, and especially  Dean O’Gorman as Kirk Douglas, all do something with roles of various sizes. Diane Lane is sadly cast as generic bland supportive wife, and Elle Fanning appears as Trumbo’s suddenly teenaged daughter.

Things improve markedly by the midpoint, where Trumbo has to use his cunning to get work, slipping under the radar and earning Oscars with scripts he wrote for other people or under a fake name while taking his family for granted. Sure would’ve been great if some effort had been made to explain why Trumbo’s work was so successful. What made him such a great writer? Aside from a shared scene we all know from Roman Holiday, which he wrote, we don’t get much of a sense of the work itself.

Still, there is something essential in this tale of injustice beyond a look at Hollywood’s dirty history. Trumbo provides evidence in the ongoing case of the mongers of fear swaying public opinion. In the Time of Trump, that’s hardcore relevance.