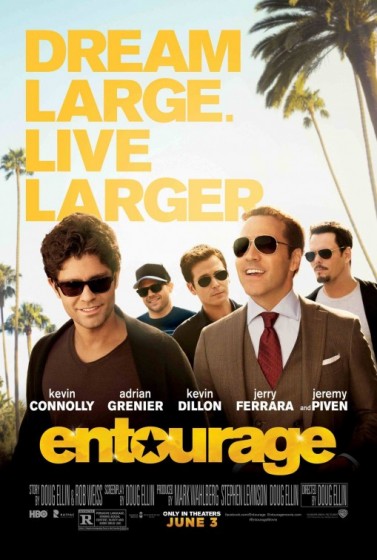 Directed by Doug Ellin, written by Ellin from a story by Ellin and Rob Weiss, from the TV series

Watching Entourage, I spent a lot of time thinking about the expectations we have when we watch a show on HBO, and then a movie at the multiplex.

On TV, I enjoyed the story of suburban bros who went out west and found fame and fortune. It was light Hollywood satire that doubled as wish-fulfillment—a bromantic comedy, or bromcom. Basically Sex And The City for guys, as I’ve often remarked. Maybe a little less sophisticated than its HBO predecessor, but then a lot of us fellows are a little less sophisticated, aren’t we? 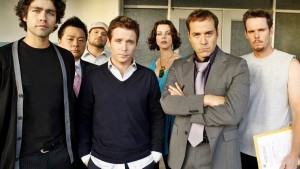 Now that creator Ellin, four years since the conclusion of the series, has elevated the material to the silver screen, I expected there’d be a little more at stake than in an average episode. While I sat watching the film—and I can’t deny I enjoyed some of it—I realized Ellin has singularly failed to make his movie feel any different than the series. This is an extended episode that could have been easily spun into another season, where it would have been utterly acceptable. Accordingly, it’s not much of a cinematic experience and will fit comfortably back on HBO up against reruns of its source material. 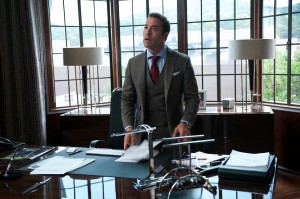 Everyone from the series is here: Vincent Chase (Adrian Grenier), the (purportedly) talented and handsome movie star. He’s just had a marriage go up in flames, but that’s fine since he can party away the pain on a yacht in Ibiza with floss-clad models. Vinnie wants to act and direct, which is handy since his former agent, Ari Gold (Jeremy Piven), is now a studio head, and has a project for him: A modern take on Jekyll and Hyde where our tortured hero is a pill-popping DJ. (And no, I’m not kidding.)

Chase’s buddy, manager, and producer, Eric, or E (Kevin Connolly), is dealing with the problems of being irresistible to beautiful women and his ex, Sloan (Emmanuelle Chriqui), is having his baby. Turtle (Jerry Ferrara), who has dropped a few pounds, (which everyone can’t help making fun of), is independently wealthy thanks to his tequila company. He wants to date UFC fighter Ronda Rousey (playing herself). And Johnny Drama (Kevin Dillon) is… entirely unchanged.

As usual, we don’t see any of the (presumed) sweat and hard work it takes to make a movie, the waiting, hustling, decision-making and anxiety involved. That’s because the most glamorous thing about working in the movie business is saying you work in the movie business. And this is all about the glamour and lifestyle. 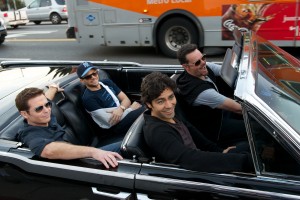 We just get the result: Hyde is almost perfect—the clip we get to see makes it look ridiculous—but since he’s gone over his $100 million budget, Vince just needs a little more money to complete his first feature. What the problem is with the existing cut is never really explained. Everyone who sees it calls it a masterpiece, so why does it need more money before it’s released?

Ari goes, hat in hand, to Texas, to ask for more cash from his independent financier, played by Billy Bob Thornton. That dude is a little too busy to concern himself, so he instead sends a proxy, his shaggy son, played by Haley Joel Osment. 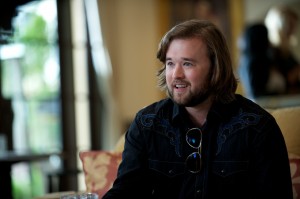 Here’s where the movie’s insular world gets sour. Osment, who we all remember as the cute kid from The Sixth Sense and A.I. has become your regular, round-faced adult. Any glamour he might have brought to this film is tamped down by a hicksville accent, terrible wardrobe, bad hair, and startling averageness. He shows up at his first Hollywood party, and immediately hits on model/actress Emily Ratajkowski. You know, just like Vince and every other man in the movie wants to do.

This becomes a key and contentious moment in the plot. As Ari explains later: It’s the movie star who gets the girl. But in this spectacular example of how Hollywood is high school with money, even in fantasies like this one, we’re supposed to side with the bros and with Vince, simply because Osment is uncouth. He isn’t one of the in-crowd. Tactical error in the script, because the Texan is no more obnoxious than the rest of them, just not as well-dressed. 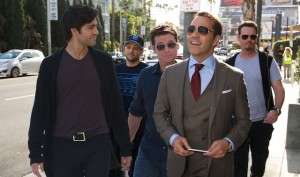 I suppose since he was born with a silver spoon in his mouth, and comes from a Red State, so maybe that’s the point Ellin is making about his villain. I didn’t buy it.

Beyond that, as with every other tale of Vince, Ari, and the boys, nothing bad happens to them. They get free cars, they smoke weed, they travel widely, they go to parties, get laid, and get chummy with celebrities (everyone from Jessica Alba to Liam Neeson) and athletes (Gronk and Brady from the Patriots are on hand). Everything works out in the end with attention, adulation, and awards.

It occurs to me, finally, on HBO Entourage was a sitcom. So is the movie.