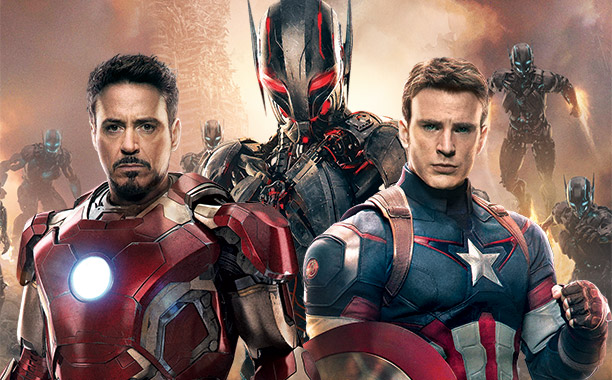 WOO-HOO! It’s here! The summer blockbuster season begins in earnest with what’s very likely to be the year’s biggest superhero movie, the most recent gigantic entertainment from the ongoing Marvel Studios domination of the multiplex. I’m excited about Avengers: Age of Ultron for number of reasons:

1) The 10 (count ’em) features leading up to this—three Iron Mans, two Thors, two Captain Americas, an Incredible Hulk, a Guardians of the Galaxy, and the previous, terrific Avengers movie (all reviewed and revisited here)—have imagined a very complete and thrilling universe of characters, which, along with the TV properties, is only going to get bigger.

Will it get better? Watching (most of) these movies is great fun, but watching Marvel Studios reach into new territories (Ant Man is coming later this summer) is like watching a one-man-band-juggler-fire-breather-snake-charmer combo. I can’t deny that as Marvel expands its empire beyond anything we’ve ever seen since (parent company) Disney established its brand, part of the thrill is wondering whether one of the balls is going to drop or if the viper will strike.

2) Joss Whedon directs, the king of this material on what will likely be his final movie with Marvel. The Buffy the Vampire Slayer and Firefly creator has an incredible gift with characters, dialogue, and an innate understanding how these fantasy worlds work best.

3) I’ve read The Avengers comics since I was a kid. My favourite villain was the indestructible Ultron, the homicidal robot, and my favourite Avenger was The Vision, the super-cool android with the ability to control his mass. He could make his body as impenetrable as a diamond or as ephemeral as a ghost. Both characters are on board here, played by James Spader and Paul Bettany, respectively.

Maybe see all y’all tonight. If not, I’ll be on CTV Morning Live tomorrow at 8:40am to discuss the film, and blogging my review tomorrow, too. Also, I’ll be stopping by CBC Radio One Mainstreet on Monday afternoon to discuss Star Wars and fantasy movie franchises. You may have heard about this: a documentary about the Nirvana frontman using footage never before seen and executive produced by his daughter, Frances. It shows Monday night at 7pm, Park Lane cinemas in Halifax.