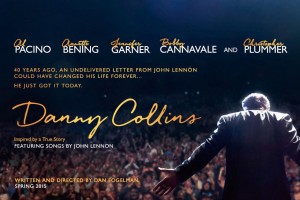 Written and directed by Dan Fogelman

Al Pacino won an Academy Award for his leading role in Scent Of A Woman. That was 22 years ago. The performance defined his whole Whoo-HAH persona. While the movie was popular, I don’t think anyone really thought it was representative of his best stuff—the award was more of a body-of-work recognition, a we-can’t-believe-you-haven’t-got-one-yet for a showy, attention-grabbing populist character.

Since then he was great in Carlito’s Way, Heat and The Insider, and I heard good things about You Don’t Know Jack, though it’s unseen by me. There’ve also been plenty of his performances that’ve erred on the side of the showy rather than restrained.

So now he’s Danny Collins, a splashy lead the likes of which we haven’t seen from him in awhile. This time he’s right down the middle—loud and hammy, but with enough nuance that shows the old master still has some depth.

Danny’s a washed up rock star, someone who hasn’t written a new song in 30 years. Imagine Neil Diamond—though, props to Neil, he has written new stuff recently—genetically spliced with someone like Rod Stewart. Danny’s in his 70s and he’s still living the life of excess—lines of coke backstage to go with his bottles of booze, and he’s engaged to someone a fraction of his age.

His longtime manager and best pal Frank (Christopher Plummer) tracks down a letter John Lennon once wrote to Danny in the early 70s. Turns out the former Beatle was a fan of Danny’s songwriting, and had some words of wisdom to pass on about fame, fortune and creativity. 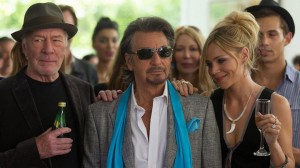 This letter puts Danny on his ass. He packs up and heads to New Jersey, where he checks into a Hilton, immediately charming the staff and, to a lesser extent, the manager, Mary (Annette Bening). He’s in Jersey to try and connect with a son he’s never met, Tom (Bobby Cannavale), as well as kick-start his creative juices, which he does by bringing a Steinway into his hotel room and writing a sad song about aging.

And that’s basically it. Of course he hits it off with Mary, despite her initial reluctance, and becomes friendly with Tom’s family, partner Samantha (Jennifer Garner) and little girl, Hope (Giselle Eisenberg). Using the considerable means at his disposal, he arranges for Hope to get into a private school in the city suited to her learning disability. Yes, that’s the kind of blatant manipulation we’re dealing with here.

This all could be terminally saccharine, and it does wobble occasionally in that direction, with some scenes that linger longer than they need to for the sake of character warmth. There’s a good 15 minutes the film could have easily lost to give it a little more narrative oomph. On the plus side, the picture is stuffed with John Lennon songs, which gives it a gravitas it doesn’t entirely earn, but is still a pleasure to hear.

And, yes, it’s hard not to think of Al’s showier, louder parts, the ones where he seemed to be coasting on sheer personality. He’s certainly not the only revered actor of his generation to take a part just for the paycheque. (Looking at you Bobby DeNiro.) I liked how this movie addresses some of that, the struggle for an artist to be true to his muse and try something new, while still giving his fans what they want—maybe occasionally taking the easy road along the way. Our expectations of artists, actors, and musicians are probably unfair, and it makes you wonder after their expectations of themselves.

Danny is memorable without being a cartoon. The humour has some genuine self-awarenss that’s refreshing. Everyone, including Danny, knows what he’s about, and the ensemble cast is especially strong, right down to small parts in the Hilton hotel staff (Melissa Benoist and Josh Peck). 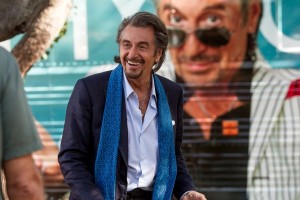 And, yeah, there’s a certain amount of slush in the material—audience eye-rolling is entirely excused when a character owns up to a potentially terminal illness. You knew that was coming. But, thinking of another recent and saccharine family dramedy featuring a crusty and unlikely father figure seeking redemption, I much preferred Danny Collins to St Vincent. Just sayin’.

And the songs are fun, too.