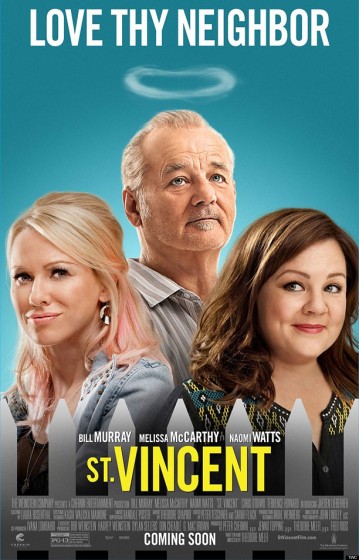 Written and directed by Theodore Melfi

From the top, a warning: St. Vincent is a story about the connection between a crusty older Brooklyn dude, Vin, and a cute little boy, Oliver.

Oliver is painfully precocious—everything out of his mouth is more thoughtful and considered than any of the adults around him. He’s the perfect child. If the movie was really honest it would be called St. Oliver.

For me, that’s a cinematic deal-breaker. The movie has a great central role for Bill Murray, along with strong support from Melissa McCarthy and Naomi Watts, but I just can’t stand the wise-beyond-their-years children trope.

I kept hoping Oliver (played ably by Jaeden Leiberher) would show some kind of typical reaction to his environmental stimuli: His mother (McCarthy) is stressed out by her divorce, having to work all the time in her depressing hospital job to support him. And this while he gets bullied at his new school and gets babysat by Vin, the curmudgeon next door (Murray). He’s an alcoholic Vietnam vet, a slobby, compulsive gambler who teaches the child how to fight off his bullies. There’s just no way a normal kid would be as gentle, considerate, and well-adjusted as Oliver appears to be.

Of course, there’s more to the story. Vin has hidden depths. Despite being deep in debt with a lone shark (Terrence Howard), he manages to take care of his dementia-stricken wife (Donna Mitchell), a sweet Persian cat named Felix, and looks out for a pregnant stripper/prostitute (Watts). He might be day drunk and spending all his time and money at the track, but he still manages to set a decent example for Oliver.

That’s hardly a spoiler. Everything about St. Vincent is cushioned by sentiment, arm-length from the reality it purports to depict. A good comparison movie would be About A Boy, also about the friendship between a man and boy ending with a scene of redemption onstage at the kid’s school. The difference is that the kid in the Nick Hornby story, Marcus, is genuinely flesh-and-blood weird and nerdy. You believed he might actually exist. About A Boy was funnier, too.

That’s not to say St. Vincent isn’t likeable. With Vin, Murray adds a fresh twist to his collection of misanthropes, and he’s always a pleasure to watch. Watts’ Daka is someone she’s never played before, broad and heavily accented. She gets the movie’s biggest laughs, which is saying something in this company.

But Melfi never misses an opportunity to cute it up with a plinky score, editing scenes to the most lightweight beats. The script takes too long to establish any real stakes, and while it improves in the second and third act, it never quite delivers on its promise.

It’s too bad. A little more gravel, a little more edge, and Melfi might have set up his star for a run at an Oscar. As is, I think he’s done Murray a disservice, because even though the Academy likes schmaltz, I can’t believe they’ll belly up to this bucketload.

St. Vincent is kinda like Felix: a little too fluffy.