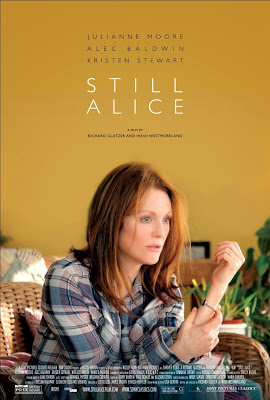 Written and directed by Richard Glatzer and Wash Westmoreland, from a novel by Lisa Genova

Sometimes a movie is most effective just by being singular. Still Alice is such a case. It’s a story that can be summed up like this: An academic gets early onset Alzheimer’s and this is what happens to her. 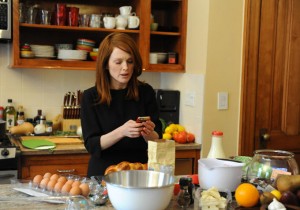 Julianne Moore is Alice Howland, a 50-year-old language professor at Columbia University in New York City, someone who has defined her identity, professionally and personally, through words. And those are the first thing she starts forgetting. Then names. One day, while running through the college campus, she gets lost.

Her husband, John (Alec Baldwin), a medical researcher, thinks she’s overreacting when she complains to him about her memory lapses. She sees a neurologist, who orders an MRI and PET scan. The diagnosis is not good.

Worse, it’s found to be a genetic condition, meaning her three grown children (played by Kate Bosworth, Hunter Parrish, and Kristen Stewart) are also in danger of testing positive for the disease.

The movie is what some might call a weepie, and that’s not an unfair assessment. Sarah Polley’s Away From Her is a reasonable comparison, though that film had more poetry. It was also a love story, a two-hander, where this is more a straight-ahead document of illness.

Still Alice is held aloft primarily by what Moore brings to the screen. She’s typically terrific in communicating her character’s exacting intellect, growing terror, and finally the physical and mental deterioration associated with the disease.

In support, Baldwin is solid, though I think maybe the makeup department might have eased up a little on him. Kristen Stewart is the biggest surprise here—as the free-spirited youngest child pursuing an acting career her mother isn’t entirely supportive of, she nails just the right tone. She and Moore have great scenes together. I was reminded a little of Stewart’s previous screen mother in Panic Room, Jodie Foster, and that relationship. (Though I grant that could be because both Foster and Moore were once Clarice Starling.) 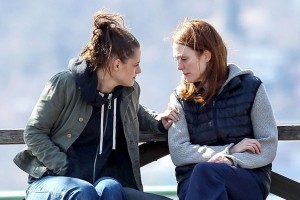 The hard questions that arise when a loved one is dealing with Alzheimer’s, the responsibility of family, colleagues, and the sufferer to her self, are all posed. There is a moment early in the third act where an alternative outcome is presented, and the film smartly lets us decide whether what happens is a tragedy or not.

Still Alice isn’t free of moments of sentiment—I found especially around the use of a Lyle Lovett song—but it’s largely restrained and avoids the worst excesses of maudlin, disease-of-the-week films. This is a story that will resonate with many and sadly, with the growing scourge of dementia, will probably have even more currency in the future.