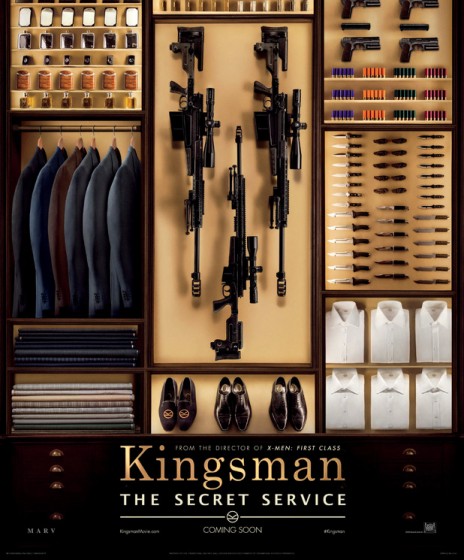 Directed by Matthew Vaughn, written by Vaughn and Jane Goldman, from a comic by Mark Millar and Dave Gibbons

Vaughn and Millar were responsible for Kick-Ass, the indie superhero movie. It had a lot going for it, but it left a bad taste in my mouth—aside from being genuinely kick ass in its action sequences and occasionally quite funny, it was also pointlessly, needlessly violent. Maybe that R-rated transgressive quality was aimed at shaking up the superhero genre, having a masked tween swear, kill people, and have the pulp beaten out of her—and if so, it succeeded, arguably. It just wasn’t my thing.

Since then Vaughn directed the excellent X-Men prequel First Class, and now he reteams with Millar, adapting the graphic novelist’s The Secret Service.

And, as with Kick-Ass, I recognize where Vaughn and Millar are playing with genre, shoving it into a new shape and updating it for a 21st Century audience, and some of that is fun. But I still found it unpleasant in ways that deadened the thrill in it.

Eggsy (Taron Egerton) is a street punk from the rougher side of London. He’s also the son  of a Kingsman who died on the job. A Kingsman is a modern knight, part of an elite squad of international spies who dress in Saville Row bespoke suits and subscribe to a gentleman’s code. Imagine a much more self-aware Roger Moore-era 007 or John Steed in the (British) Avengers. 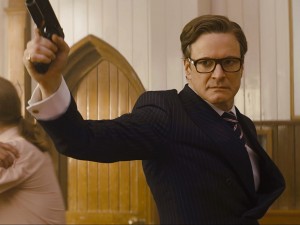 Eggsy is recruited into the fold by Harry Hart (Colin Firth, born to wear pinstripes), who, given the kid’s lineage, wants to give him a chance in the family business. Off the punk goes to Kingsman school, amongst a group of toffy-nosed blue-bloods, where he gets trained by a Scot named Merlin (Mark Strong) and the big cheese, Arthur (Michael Caine).

Meanwhile, a tech billionaire, Valentine (the getting to be tiresomely ubiquitous Samuel L. Jackson) is hatching some kind of plan, as any good megalomaniacal villain should. I’ll give you a hint of his motivation: he sees humanity as a virus on the planet. He also has a dynamite henchperson, Gazelle (Sophia Boutella), who runs on Oscar Pistorius blades with a special edge.

Anyone familiar with Bond pictures of old will recognize the many conventions being played with here. I especially enjoyed the stylized John Barry sounds from composers Henry Jackman and Matthew Margeson. And not only those, Vaughn explicitly references other action movies and comedies in the script—as if that was necessary.

This self-referential meta humour is OK, though it feels increasingly adolescent. I’d rather they trust the audience to get the homages without all the signposts, but the continual elbows in the ribs do help keep things light.

The action set-pieces, especially early in the running, are typically stellar from Vaughn, with deft use of CGI and swooping, impossible camera movements and angles. A skydiving sequence, part of the Kingsman students’ training, takes the suspense to new heights, and Egerton delivers both the attitude and physical coordination the role requires. 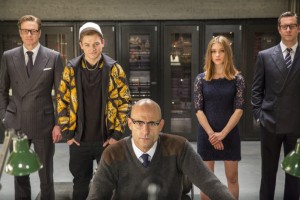 But, even as I was enjoying many of the pieces of this picture, from the detailed production design to random parkour scenes to the nice use of Dire Straits and Bryan Ferry to bookend the thing, as we went along I started to get that familiar sour taste in my mouth.

While all this genre play is deft, there’s an unpleasant undercurrent of bro-ism here. The film espouses the genteel values of the Kingsman as being beyond class or breeding, but also celebrates the style of posh Brits over the slum-dwelling Cockneys—the baked-in assumption being that’s what all those working class folks aspire to.  And the film manages to undercut the contribution of a key female character who, if the script were just a little sharper, would have had an opportunity to save the day late in the running. It all feels pretty regressive.

There’s also a scene lifted directly from George RR Martin’s Song of Ice and Fire books—the inspiration for Game of Thrones—where the Unsullied must prove their absence of compassion. Here, the same trick is applied as a final test of the Kingsman recruits. I didn’t buy it—it didn’t mesh with the organization’s gentlemanly values. It felt thrown in for shock value, which, given a psychedelic cavalcade of head-explosions elsewhere in this picture, is directly in the filmmakers’ playbook.

And, once again, I found myself increasingly grossed out by the violence. I’m no prude—I like a good bloodletting as much as the next guy—but a second-act-closer in a church is really unpleasant. I think we’re meant to revel in the gouging, stabbing, and general mayhem. I had an opposite reaction. Though, I grant you, that could have something to do with the whole thing being scored to “Freebird” by Lynyrd Skynyrd.

And then there’s Valentine’s plot. I appreciate that Millar came up with a compelling rationale for what he’s doing, and that Vaughn hired the underemployed Mark Hamill to play a scruffy scientist, but I found myself annoyed by the politics of the thing. The villain is an environmental crusader, after all. I was also perturbed by Jackson’s lisp and the flagrant, pointless fast food product placement, but that’s an entirely separate issue.

All told, I can’t deny there’s a lot here to enjoy, just as I can’t ignore the parts of it that made me queasy.