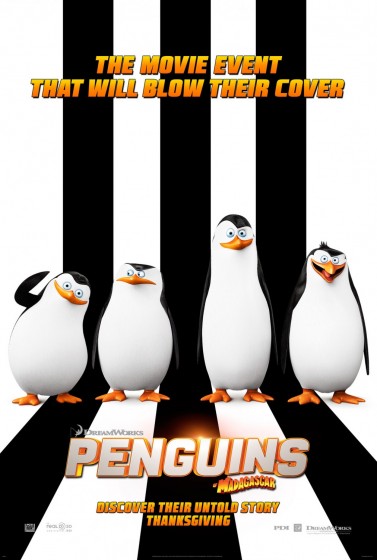 I don’t know why I bother reviewing these animated movies. They’re for kids, and who am I to recommend or dissuade munchkins on this stuff?

I guess this brief write-up is more for the parents of those kids, or maybe animation nuts who go to all these pictures. You guys are out there too, right?

Well, it’s long been acknowledged the four penguins are the best parts of the Madagascar series, the three (to date) hit animated flicks about a group of New York zoo animals that traipse around the planet having adventures.

Now the feathery supporting cast finally star in their own movie, which is fun if you can keep up with it.

The first act—where we get the flightless waterfowls’ backstory, follow them as they break into Fort Knox for cheesy snacks, meet a homicidal pink octopus, and get chased through Venice—is so frenetic and fidgety it should satisfy even the shortest attention span and give a headache to most right-minded adults.

I did, however, enjoy the early nods to James Bond movies Goldfinger and Moonraker.

But about halfway though PoM settles and slows down a little. The plot details—including the part about one of the birds needing to feel validated—is actually quite sweet. And there’s lots of fun to be had with John Malkovich voicing that vengeful octopus (whose name is Dave).

Really though, if you’re looking for a good reason for seeing the movie, it’s to laugh as Benedict Cumberbatch—playing a secret agent wolf—mispronounces the word “penguin.” It never gets old: