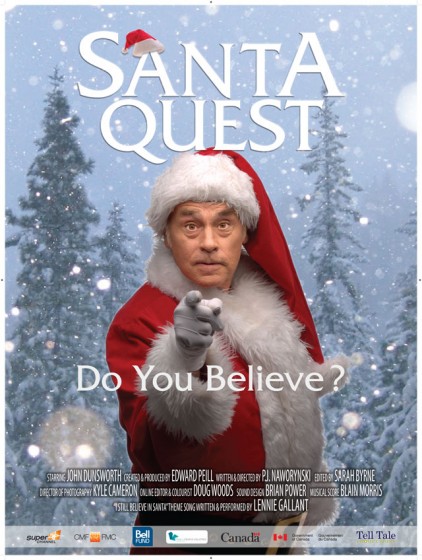 John Dunsworth has gone to the trouble of printing out photos of himself as Jim Lahey—the character he plays on Trailer Park Boys—passed out and sprawling, with a large stain on the crotch of his familiar tan pants. Next to him, shirtless as always, is Pat Roach as Randy. These photos are for autograph-seekers. But if you look closely, you’ll see a message at the bottom of the image urging fans to donate to Doctors Without Borders.

This seeming incongruity—ribald humour cut with a philanthropic edge—is a big part of what Dunsworth puts out in the world. And his roughness couched in kindness is at the core of the new documentary, Santa Quest.

Jim Lahey, the trailer park supervisor with the drinking problem, has been a staple of the Trailer Park Boys phenomenon through nine seasons of TV and three popular feature films. Dunsworth’s also guest-starred on four seasons of the series Haven. He’s also known locally for his theatre work, 40 years of acting, directing, and casting. He’s happiest when he’s busy.

When Dunsworth isn’t working on screen or stage he’s offering his time as an auctioneer at charitable events or helping out wherever he can in his creative and lived community. And, at this time of the year, he can often be found wearing the white beard of that seasonal elf, Santa Claus, for food drives and the like. He plays Santa when the Boys go on tour, too, though Lahey as Santa tends to be drunk and abusive. His stint in the red and white togs began in the late ’70s as a mall Santa. Those long hours comforting children and having his photo taken didn’t make him believe in Santa Claus, though. He admits to some cynicism around the sentiments of the season.

“What I got out of this documentary is the chance to work, to travel, and to meet people. I’d rather meet someone interesting at Tim Hortons on Exit Five on the 103 than look at a nice building in Stuttgart… And I amuse myself even more when I’m alone. You should be with me when I’m alone some time. I stole that one from Cathy Jones.” Santa Quest did wind up taking Dunsworth to Europe to look at buildings, to Vienna and points north. He entered the annual Santa Winter Games in Gällivare, northern Sweden, where he competed in physical trials with highly motivated Christmas elves from around the world, some half his age. He also went to Italy to explore the myth of Santa Claus as it’s celebrated there—remembering the work of Santa Nicola, otherwise known as Saint Nicolas.

“You’ve got this money-collecting cathedral in Italy, holding bones you can’t see hidden in a crypt,” says Dunsworth. “The townspeople love it, they make some money. Right from the beginning people have been capitalizing on this poor little guy.”

Santa was used as a threat in the Dunsworth home when he was a kid. “My dad used to say, ‘No Christmas!’ in the same tone as, ‘Johnny, up to your room!’ Santa was a scary figure for me. I couldn’t sleep before Christmas. I’d wrote letters—prevarication for the things I’d done.”

But Dunsworth also knew his parents loved him, and wouldn’t leave him hanging come December 25th, whatever trouble his childhood mischief got him into. “Bless my mother’s wonderful soul, she took care of us at Christmas,” he says.

Dunsworth isn’t shy about sharing personal details of his life. In the documentary he invites us into his home. We get to spend a little time with his mother, too.

“I knew John’s mom was an amazing person, that’s where John gets so much of his humour from,” says PJ Naworynski, the director of Santa Quest.

Accompanying Dunsworth on his journey, Naworynski didn’t really know where it would lead. Europe, certainly, but beyond that? Out on tour with the Trailer Park Boys?  How far would Santa John take them? And together would they find some kind of truth about Santa Claus along the way?

“We didn’t know if a 67-year-old guy could really be the best Santa in the world at the Santa Winter Games,” he says. “Everyone will have a few yucks watching him try, but the other layer is: What are we really doing with this Santa thing? Everyone needs to take a look at this time of the year, and maybe be a little less selfish, like the original guy was, whether you believe in him or not.”

With this, Dunsworth agrees. His coarse humour, sometimes hiding his thoughtfulness and his kindness, peels away.

“When I was over in Italy, I learned Santa Nicola was Turkish,” he says. “He threw gold in through a window and it went into someone’s shoes, so that’s where that started, gifts in a stocking. He used his family’s wealth to protect children. I like to think I embrace his principles and will help out when I see someone in need. And I espouse that.

“It’s individual acts of kindness that matter. I think a human life is a magical thing.”

Santa Quest is now available on Superchannel and iTunes in Canada, and on Vimeo on Demand in the United States.