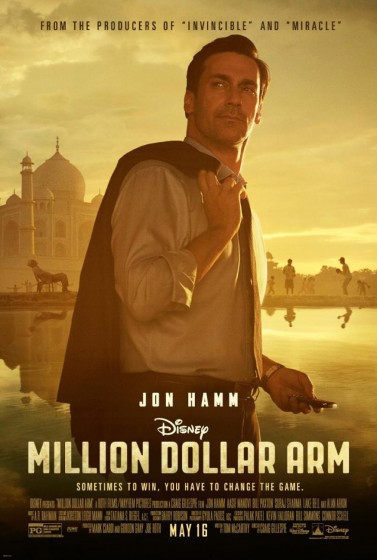 I went to see this Disney picture for a few reasons. I liked the sound of the true-to-life angle, it’s based on the story of two young guys from India who were brought to the US to take a shot at being baseball pitchers. I liked the creative behind the camera. Tom McCarthy wrote a few of the best scripts in American film in the past decade: The Station Agent, The Visitor, Up, and Win Win. And Gillespie directed a fine little Ryan Gosling picture called Lars And the Real Girl. It also features the talented Lake Bell.

Turns out, McCarthy and Gillespie have shelved pretty much all their indie cred for this by-the-numbers sports picture. From scene to scene, you can pretty much predict every single plot development, every single “twist”. It’s smooth, sweet, syrupy, and right on the money. Which is fine, I suppose, if you’re down with it.

Jon Hamm has his name above the title of a feature for the first time as sports agent JB Bernstein, struggling to keep afloat his small agency when his big ticket athletes start abandoning him.

I’ve seen Hamm in stuff like Bridesmaids, 30 Rock and The Town, where he’s refreshingly unlike his iconic Mad Men role. Here I found him very much in Don Draper-esque hustler mode, which added to the feeling of over-familiarity. And it’s tough to have a lot of sympathy for the guy. He’s a playa and he makes a good living at a job that’s hard to explain why it even exists. I mean, why does the world even need sports agents? To take 10% from professional athletes’ sweat? I can’t believe I’m saying this, but Tom Cruise was much more personable doing the same thing as Jerry Maguire. It helps that JB has a sidekick who makes fun of him—frequent Daily Show MVP Aasif Mandvi.

JB comes up with a cockamamie idea to go to India and start up a TV gameshow in order to find the country’s best cricket bowlers, import them to the US and turn them into baseball pitchers. It’s a whacked concept, but somehow he’s able to secure financing for the deal.

Off he goes to India for about a third of the movie, which is its best portion. As a travelogue, I really enjoyed Million Dollar Arm, and I have it on good authority that JB’s experience of India as a “land of extremes” is fairly accurate. Yes, this is India as seen through a western lens, but it’s clear and engaging, and Hamm is convincing as the Ugly American.

Also, the two burgeoning pitchers, Rinku and Dinesh (Suraj Sharma and Madhur Mittal), and their minder, Amit (Pitobash), have plenty of on-screen charisma. I guess what they mostly need to be is adorable, and they have plenty of whatever magic that requires.

Baseball scout Alan Arkin is also along for the ride, and I’ve had enough of his interminable cranky-old-man routine duplicated movie to movie.

The routine mechanics of the Disney feel-good material kick in once the boys are back in Los Angeles. Only the vivacious Bell as JB’s tenant/inevitable love interest does anything to relieve the predictability, though Bill Paxton as a trainer has a good moment or two.

Can there be any doubt that JB will gather the value of family and humanity over profits? That JB will give up the parade of vacuous supermodels and connect with the medical student living out back, the one he can really talk to? That Rinku and Dinesh can overcome JB’s selfishness, their own nerves, and make it to The Show? (There’s something for Bull Durham fans.) That we’ll get to see the actual folks who inspired the story in photos and video footage over the end credits?

I don’t need to answer these questions for you. You know.

There’s a whole other argument against this movie from a macro perspective, the one that derides Hollywood’s habit of telling tales that lionize the American Dream(™), celebrating the US of A’s cultural contribution to a world full of unfortunate but grateful foreigners. Unfortunately, Million Dollar Arm has the DNA of those kinds of colonial myths.

Or you could just consider it an entertaining, reasonably well-made bit of fluff and let it the plot drift from the mind a few steps from the screening room. Maybe some of the images of India will stay in there. That would be OK.