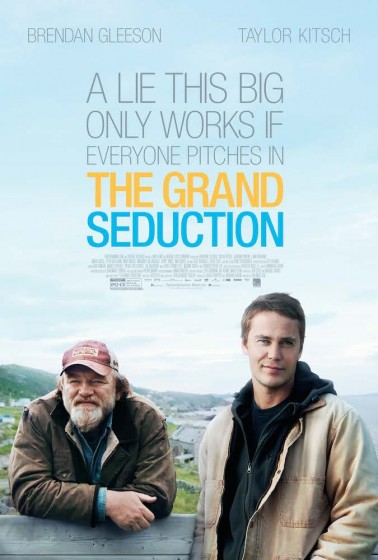 I saw this movie when it opened the 2013 Atlantic Film Festival. It was much beloved by the audience, and it’s easy to understand why. The movie is a charming, slightly sassy tale of good people living in a Newfoundland fishing village who are willing to do anything to survive there, including concocting an elaborate lie to keep a city-slicker MD sticking around.

Now, I’ve gone on the record about how it bugs me the way Maritime culture gets packaged up and sold, in movies, music, tourism, what have you. Now that I’ve gotten that off my chest, I’m willing to admit that maybe it was a bit churlish of me to use that brush to paint this particular feel-good picture. Taken on its own merits, there’s nothing wrong with The Grand Seduction other than as a reflection of our short cultural memory—maybe an example of the Two Solitudes: It was totally fine as a movie set in a Quebec outport where everyone spoke French. This film is a remake of the 2003 hit La Grande Séduction, entitled Seducing Doctor Lewis in English Canada.

I heard the new picture was going to be directed by the original writer, Ken Scott, but I gather Scott got the call from Steven Spielberg to go to Hollywood to remake one of his other French language directorial  successes, Starbuck. That wound up being called Delivery Man, and starred Vince Vaughn.

So Don McKellar stepped in, along with Goon‘s Michael Dowse, and they did a bang-up job. As I mentioned above, it’s the story of a small Newfoundland outport called Tickle Head. Yes, it is.

Residents of Tickle Head are trying to get big oil to open a processing plant in their community. In order to make that happen, the insurance company insists a doctor be living in the town. Cue the seduction, getting a young doctor to stick around long enough for the oil company to sign on.

A sterling cast of the best Newfoundland thespians (Gordon Pinsent, Mary Walsh, Mark Critch, natch’) do typically appealing work, and Taylor Kitsch, taking a break from blockbuster bombs—it looks good on him—is solid in the lead, convincingly pretty enough and also self-involved enough to be fooled by the townspeople’s clumsy efforts. The great Dublin-born Brendan Gleeson plays the mayor, and Liane Balaban, who would be a star in Canada by now if we had those, is a possible, though reluctant, romantic partner for the doc. She doesn’t get much to do beside rebuff and then, maybe, admire Kitsch from afar, which is a “love interest” cliche I’d like to see less of.

Pinsent, doing cranky better than almost anybody, gets a lot of the best lines. No one has ever been more convincing saying this: “I’ll punch you in the throat.”